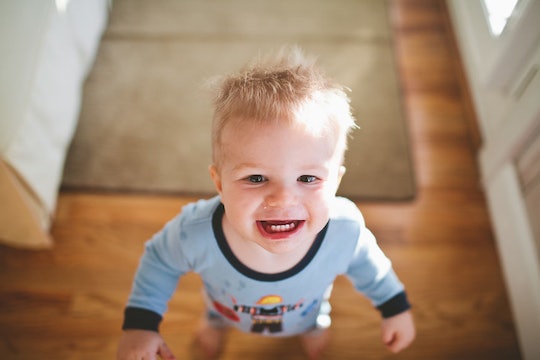 Shopping for kids can be hard for a number of reasons, but one difficulty many parents face in this department concerns gender. All too often, parents are presented with clothing options that subscribe to outdated gender norms, a sentiment one mom brought up when she called out the Gap's gendered clothes for toddlers. As for whether her concerns were heard? The answer might surprise you.

Morning traffic anchor for news channel NY1, Jamie Stelter, was attempting to buy her 1-year-old daughter Sunny pajamas on Tuesday, Feb. 19, when she encountered a frustrating problem. Stelter couldn't help but notice that the "super cute traffic PJs" she wanted to buy Sunny were from the GapKids' boy department, while the girls department offered her no such options. Irritated by the apparent gendering of toddler pajamas, the mom did what any fed-up parent would do — she took to social media to vent, reported The Huffington Post.

"I just bought these super cute traffic PJs for Sunny from the little boys department of Gap but WHY WHY WHY are they not also in the girls department?!" she wrote on Instagram. "Cause they’re blue? Cause they have cars on them? Cause only little boys can like blue and cars?"

Stelter also expressed annoyance at the phenomenon of girls getting boxed into designs featuring pink colors and unicorns, for example.

"I am so over everything for girls being pink and unicorns and saying 'i’m awesome' and everything for boys being fun prints in bold colors," she said. "This is (sadly) not new and (sadly) not just the Gap but what are we telling girls — mine who is not even 2 years old yet — that this is what they should *and shouldn’t* wear?! why are there even separate boys and girls departments at this young age?!"

The reporter also expressed hope that she wasn't alone in her "mom rage."

"Been buying clothes for both my kids from the boy’s section forever!" one person commented on her post. "We have bug pjs, space ships, etc."

"I got annoyed by the constant lack of any other colors besides pink!" someone else said. "I once got pink dinosaurs PJ’s from the gap and was so happy to see dinosaurs instead of princesses!!!!"

Another person chimed in: "I always end up buying “boy” pjs and tops for my daughter since I don’t always want her to just wear pink and princess type stuff."

Gap did not immediately respond to Romper's request for comment regarding Stelter's post, but it did share a statement with TODAY, writing: “Our design team in New York City creates PJs for both boys and girls to wear and love, mix and match. We are working with our merchants on improving the online shopping experience to better reflect our design intent.”

But wait — it gets even better. Not only did Gap personally respond to Stelter, telling her about its plans to "update" its "design intent," but the company actually delivered on its promise.

"We did it! Gap now lists all their PJs in both the girls and boys departments!!!" Stelter gushed on her Instagram Stories Thursday.

Of course, this victory doesn't mean girls can't wear pink or princess-themed designs. If your kid naturally gravitates towards a certain style or color, I think you should embrace that no matter what. But it's worth pointing out that many clothing companies box kids in at a young age, as an article in Refinery29 explained, leading them — and parents, for that matter — to believe that there's a "right" way for girls and boys to dress.

Stelter touched on this issue in an interview with TODAY, explaining: "I really believe that there doesn’t need to be separate sections for girl and boys at a young age. When they’re older and have different body types, it makes more sense. But all toddlers have the same round bodies.”

Kudos to Stelter for speaking out on this important issue because it goes to show how one person can make a big difference. And props to Gap for taking its customer feedback seriously.