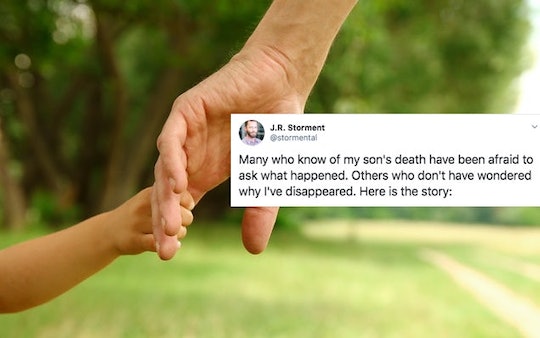 Parents Whose Son Died In His Sleep Urge Others To Prioritize Family: "Hug Your Kids"

It's the thing every parent fears — the death of a child. No parent ever, ever should have to experience this horrible, devastating thing. Ever. But it happens sometimes, as much as we wish it wouldn't, and it's impossible to imagine how a parent could go on. How they can face another day after losing their child. There are some who might justifiably collapse under the weight of their own grief, and no one would blame them. But there are also those who channel that grief into helping others, such as two grieving parents who are urging others to prioritize time with kids after their 8-year-old son died suddenly in his sleep.

Jessica Brandes is a naturopathic doctor from Oregon, according to her LinkedIn page. She is also mom to 8-year-old twin boys Wiley and Oliver, who she shares with husband, tech mogul J.R. Storment. The couple recently experienced something truly unthinkable: Wiley went to sleep one night after a day of summer fun and never woke up again. He died in his bed that night, and while the definite cause of his death will not be known for months, his parents shared that he'd recently been diagnosed with Rolandic Epilepsy, a type of benign, childhood epilepsy that causes sufferers to experience seizures at night, as his mother wrote in a recent essay on LinkedIn.

In the wake of their son's recent death, both parents have made the brave and selfless decision to share heartbreaking essays about Wiley. About the boy they lost, the grief they share, and their wish for other parents to prioritize their children whenever they can.

"Over the last three weeks I have come up with an endless stream of things I regret," Storment wrote in an essay published on LinkedIn. "They tend to fall into two categories: things I wish I had done differently and things I’m sad not to see him do. My wife is constantly reminding me of all the things he did do: Wiley went to 10 countries, drove a car on a farm road in Hawaii, hiked in Greece, snorkeled in Fiji, wore a suit to a fantastic British prep school every day for two years, got rescued from a shark on a jet ski, kissed multiple girls, got good enough at chess to beat me twice in a row, wrote short stories and drew comics obsessively."

Storment shared that the night before Wiley died "normal" and their son had been playing with friends they had over for dinner. "Wiley was healthy and engaged," Storment wrote.

Brandes was the one who found their son in his bed the next morning, sharing in her powerful LinkedIn essay that Wiley was diagnosed with Rolandic Epilepsy roughly nine months ago after he experienced a seizure. "His seizures were related to his sleep cycle and we vowed to keep his quantity of sleep as regular as possible so as not to trigger seizure activity," Brandes wrote.

Brandes went on to share that nine months later, she noticed Wiley seemed to be sleeping later than usual. "I looked in on him and saw a peacefully sleeping child cozy in his bed after a long day of summer fun. He was not sick. There was no indication he was even slightly unwell," she wrote.

The day Wiley died, Brandes shared in her essay that she "became suspicious" that he'd been sleeping too long and went to check on him. "There was no emergency, no opportunity for intervention where I could have changed the outcome," she wrote.

Brandes concluded her powerful essay urging others to be present with their loved ones as much as they possibly can. "If we’ve learned anything at all, it’s that life is fragile and time really can be so cruelly short," she wrote. "We wish a lot of things were different, but mostly we wish we’d had more time."

Her essay continued, "If you are a parent and have any capacity to spend more time with your kids, do. When it ends, there’s just photos and left over things and time is no longer available to you. It is priceless and should not be squandered. Take your vacation days and sabbaticals and go be with them. You will not regret the emails you forgot to send. From now on, if you email or text me and my reply takes longer than expected, know that I am with the people I love sharing my time, creating my new identity and I encourage you to do the same."

Storment reiterated his wife's message in his own essay: "Hug your kids. Don’t work too late. A lot of the things you are likely spending your time on you’ll regret once you no longer have the time. I’m guessing you have 1:1 meetings on the books with a lot of people you work with. Do you have them regularly scheduled with your kids?"

Both parents are planning to prioritize their own son Oliver, who has lost his twin and his best friend and will undoubtedly need extra love and attention. But they are also reaching out to other parents, cracking open their own pain and regret and grief to offer beautiful words of advice. To spend time with your kids. To prioritize them. Not because you might lose them... but because you still have them.