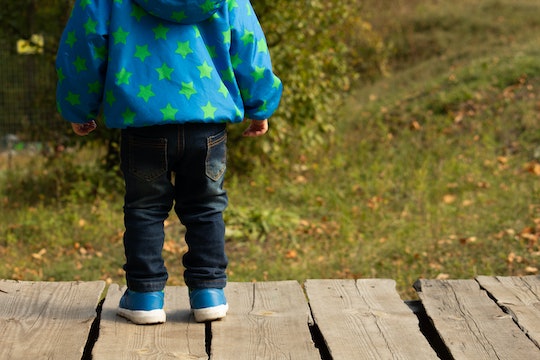 Life can get terribly busy when you're a working mom trying to juggle time with your family and your career. Sometimes a little detail will fall through the cracks and I'm here to tell you not to beat yourself up about it. Things get forgotten sometimes — it happens. Don't sweat it. Unfortunately, and oh-so-adorably, one 2-year-old little boy named Alexander vehemently disagrees. When his this toddler's mom forgot to kiss him goodbye recently, he was really not having it. And boy oh boy, did he let her know in the most glorious toddler rant you will see today.

Diana Simos of Jacksonville, Florida recently shared a video her husband Christos shot of their 2-year-old son Alexander. It seems she had gone to watch Alexander at his soccer practice, as she wrote on Facebook, and then was "in such a hurry to get back to work" that she forgot something vitally important: His goodbye kiss.

I think we've all been there as working moms. I know I once forgot to leave a lipstick kiss mark on my oldest son and he cried himself to sleep, something that haunts me almost two decades later. Fortunately for Alexander, he had someone to commiserate with who understood what he was going through. His father Christo, who totally encouraged his son's hilarious rant.

Alexander opens up his rant by pointing to himself and explaining quite clearly, "Mama, and me and (kissing sound)," with an indignant head shake, indicating that his mother did not, in fact, kiss him goodbye. Nor did she apparently kiss "Dada" or "baby" goodbye, because we all know bringing people into your rant to be incensed with you is a lot more fun.

His father helped by clarifying, "She didn't give you a kiss? And she just went to work?" At which point Alexander threw his arms wide and said, "Yeah!"

It's nice to be understood.

The little guy finally winds down his rant by just sighing, "Oh man!" because honestly, the deed has been done. Or not done, as is the case. All there is to do at this point is make sure his mother knows she has greatly disappointed him. Also the other 102,000 people who watched the video on Facebook and enjoyed Alexander's indignation immensely.

"Mommy, you are in big trouble when you get home. This is sooo sooo precious!" one social media user wisely noted on the video. Another Facebook user was thinking a little further into the future, when Alexander will have the language skills to back up his vehement rants, writing: "Just wait until he gets to talking good, he'll have no problem giving you a piece of his mind."

I feel like it's important to leap to Diana Simos' defense and note that she added a hashtag to the video #MadeItUpToHimThough, which tells me she presumably made it all better for her disgruntled little chap. The good news is that, in my experience, toddlers tend to be pretty quick to forgive if you give them a few minutes and distract them with pretty much anything. Although for some reason, I suspect little Alexander is not the forgetting type...

More Like This
Viral Reddit Post Asks If A Toddler Can Watch Cartoons Without Headphones On A Plane
Over 10,000 Sippy Cups & Bottles For Toddlers Recalled Due To Lead Poisoning Hazard
Here Are Parents' Top Trending Searches In 2022, Because Google Really Is Our BFF
"Corn Kid" Handed Out Over 40,000 Cans Of Corn At A Food Bank Ahead Of Thanksgiving