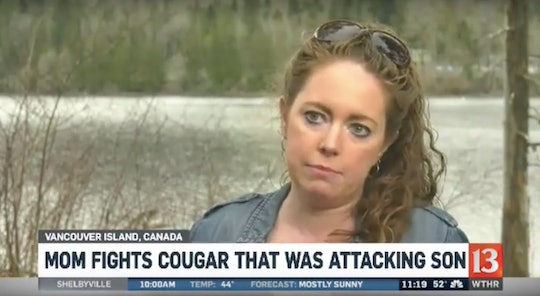 Do you ever wonder if you really do have that whole maternal instinct thing going on? I mean, obviously we all love our kids and would do pretty much anything for them. But I'm talking about something deeply primal. An instinct that kicks in during a severe emergency that wills you to protect your child above all else, including yourself. I've wondered about that many times... but I can tell you about one mom who doesn't need to worry. In fact, according to ABC News, a Canadian mom fought off a cougar attacking her son, credited her "mom instinct" that kicked in immediately.

Chelsea Lockhart lives in Lake Cowichan, Vancouver Island, off the coast of British Columbia, with her husband and her 7-year-old son Zachary, according to the Daily Mail. She was apparently getting some household chores done in the kitchen of her home when she heard her son outside and her fence rattling. When she went in her backyard to have a look, she found a young male cougar attacking her child, USA Today reported. Apparently it had crawled through a hole in the fence to get at Zachary, who had tried to run for the house. But the cougar was too fast.

As Lockhart explained to CTV News, "I could hear his voice, I could hear struggling, so I ran down the stairs and ran to his voice and turned the corner, and I see this animal on my child."

The cougar had her son's arm in its mouth, but instead of freezing in a panic, Lockart sprang into action. "He was on the ground and the cougar was over him and it was attached to his arm. I had a mom instinct, right? I just leaped on it and tried to pry its mouth open," she explained in the same interview with CTV News.

Lockart reached into the cougar's mouth and tried to pull her son loose, but he wasn't giving in. And that's when she told news outlet she started to pray for help. "I knew that in my own power and in my own strength I wasn't going to be able to pry its mouth open, so I started praying in tongues. I'm just crying out to the Lord. Three sentences into me praying, it released and it ran away," she said, according to the New York Post.

CBC News reported that Zachary was airlifted to a nearby hospital with wounds to his head, arms, and neck. When he was released from hospital, he went to his grandmother's house where he is expected to make a full recovery.

Lockhart's response to her son's potentially dangerous attack is a real testament to the validity of the maternal instinct. That primitive pull a mother has to make sure her child thrives and survives. We all have it in us, as National Geographic states, even as it ebbs and flows through the years as our children grow.

But here's the thing that this mom's reaction to a cougar attacking her child should tell us — when it comes down to it, we're going to get in there for our kids. And that's incredibly comforting, if you ask me.