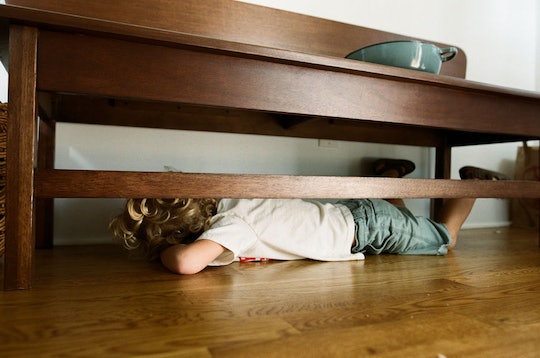 There is a widely contested debate among parents about when is the right age to start leaving kids home alone. While there is no right answer, and many parents have different answers, most would never consider leaving a kindergartener on their own. This became abundantly clear on Reddit recently, where a thread about a pregnant mom who left her 5 year old home alone while she ran errands got incredibly heated (for good reason).

In the original post, called "leaving a 5 year old at home," a woman going by the name of Tarin explained the circumstances that led her to do just that. Like many pregnant moms, stay-at-home mom Tarin was finding it difficult to get things done. Her fiance only has one day off each week, according to the post, meaning she's left to manage the household on her own most of the time (easier said than done when you're 34 weeks along and have an active little boy to wrangle). So one day, in an effort to avoid dragging her son along on errands, she decided to leave him home by himself.

"It's a pain being pregnant and having to get my son ready and in the car, so I usually leave him home behind my fiance's back. (No judgment please)," Tarin wrote.

In the post, she went on to recall one particular incident in which she left her son behind while his lunch was in the oven. Tarin ran to the mall, according to the Reddit thread, and said she "figured by the time it was ready, I would be home." Her son largely "just plays games on his iPad/watches TV," she explained, suggesting that he wasn't distressed by the situation. Her fiance, however, wasn't comfortable with the idea when he arrived home early one day to find the boy alone.

"Why the f--- is Brent here all by himself, are you crazy?" the fiance texted, according to Tarin's Reddit post, upon finding the child at home with no supervision. "How do you not see this is wrong?" he continued.

Tarin's objective in sharing the post (as well as the texts), she explained, was to find out whether others would be upset by those kinds of messages from a significant other. She wrote in the Reddit post that she felt "degraded and belittled over nothing," but other users on the platform didn't seem to think leaving a boy her son's age alone was "nothing." Most commenters agreed that it was troubling that Tarin felt a 5-year-old child was self-sufficient.

"I might argue a kid can handle themselves for a bit, but a whole hour, with the oven running, no food ready, while she is out at the mall?" One user wrote. "Five minutes in my kid would have burned himself on that oven."

Another agreed that while a child may be able to entertain themselves at that age, it isn't a sign they're ready to be left alone for any length of time, writing, "Even if you set aside the question of whether a child can take care of themselves, there still is a question of what would happen in an emergency. The door is unlocked, will he walk outside? What would he do if a stranger walks in? The oven is on. Will he open it because he's hungry and end up burning himself? What if the nuggets catch on fire while they remain in the oven? Will he call 911? Will he know to leave the house? Or will he hide under the bed?"

Some commenters even went as far as to suggest that Tarin's decision to leave her 5 year old home alone was a sign that she's not ready to have a second child. "If she can't manage putting a 5-year-old in the car to grab lunch, she won't be able to take care of a 5-year-old and a newborn as a single mom," one commenter wrote.

As for when the right time to start leaving a kid home alone is, most commenters on the Reddit post said they were a bit older than Tarin's son when they were first left alone. One admitted they were left "home alone for hours when I was 6 or 7." Times have changed since then, though, and adding the oven into the mix creates a new element of risk.

While moms have been arrested for leaving kids older home alone, according to Parents, Tarin doesn't appear to have faced any backlash beyond the judgement of other parents online. There are hard and fast laws on the age and circumstances under which a child can be left alone, and according to U.S. Department of Health and Human Services Child Welfare Information Gateway, they vary by state. According to the law, in some states children as young as 8 years old can be left on their own, while in others children have to be between 10 and 14.

If you're planning to leave your kids alone for any length of time, use your discretion. Setting boundaries and checking in with your kids can make all the difference in these cases, but too young is too young... and for once, it seems nearly everyone agrees that 5 years old is probably too young.