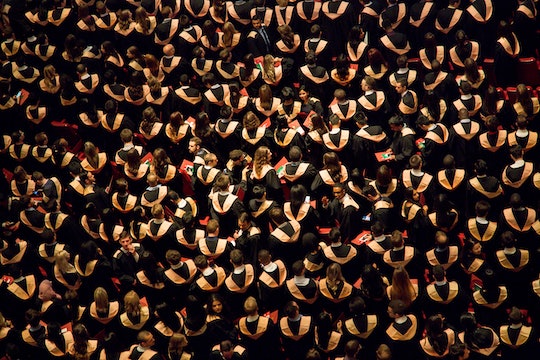 "Higher education is important to success." That's the message every student hears every day during their high school career. But many of those students face barriers that put college out of reach. Some may never earn a degree, while others may take decades to complete one. One recent case: On Mother's Day, mom Melissa Gillespie graduated college 17 years after starting. Her story is one of perseverance, but also a reminder of why so many parents are prevented from finishing four-year degrees.

According to Babble, Gillespie, a 37-year-old mother of three children, earned a Bachelor's degree in nursing from Southern New Hampshire University, walking the graduation stage on Friday, May 12. She initially enrolled in college 17 years ago, but soon found herself moving around the country because of her husband's job as an auxiliary mechanic in the United States Navy. At one point, Gillespie spent four years out of school in order to raise her three children while their father, Quinton, was stationed in Saratoga Springs, New York, according to TODAY. But in 2015, she earned her Associate's degree, then went on to pursue her Bachelor's.

While the journey was frustrating at times, I am too stubborn to throw in the towel on something I want to achieve. Giving up is easy. There can be one hundred reasons to quit on yourself each day. There only has to be one reason to keep going. My family is the one thing that motivates me during the toughest times.

According to KSAT, Gillespie is the first person in her family to graduate college. She grew up in a low-income household where "education often [felt] like a pipe dream," Gillespie told the news station. Her four-year degree, then, is much more than a dream come true; according to TODAY, Gillespie believes her achievement "normalizes higher education" for her three kids. It shows them that, no matter what you face or where you come from, achieving your dreams are not out of reach, she said. Gillespie told TODAY,

My oldest child wants to be a plastic surgeon to help people coming back from combat, my middle child wants to major in mechanical engineering and minor in biology so she can build submarines to do research. My son wants to be an astrophysicist. What we are trying to instill in them is working.

Gillespie's determination is something to admire. As a person who was pregnant, then parenting, while finishing her master's degree, I understand all the willpower, privilege, luck, and determination it takes to finally walk across that stage. But Gillespie shouldn't have had to wait 17 years to graduate. In fact, no parent should have to wait nearly two decades to earn their four-year degree.

Those statistics are not surprising when you consider that the costs of higher education continue to rise, while states continue to spend less on education funding, as the Pew Charitable Trusts noted. Now couple those costs with the costs of child care; according to Economic Policy Institute, infant care can cost as high as 212 percent more per year than in-state tuition for a four-year public college. If a parent can't afford to put their child or children into daycare, or even afford a baby sitter, that forces them to put their dream of a college degree on hold.

Never mind that, in many states, not all two-year and four-year colleges will transfer credits from other schools, which puts students facing time and economic barriers at a greater disadvantage. In Gillespie's case, she told TODAY that she had to re-take all of her prerequisite classes after her family relocated to Washington because her credits expired. "I ended up completing 218 credits for a 120-credit degree," she told TODAY.

Gillespie admitted that she had the support of Quinton, her family, and friends while she went for her college degree. Not every parent, though, has the support of loved ones to help them pursue their dreams. Determination is no doubt an important factor to meeting your goals. But it's also necessary to recognize that structural barriers exist that make it impossible for so many parents to achieve their dreams.