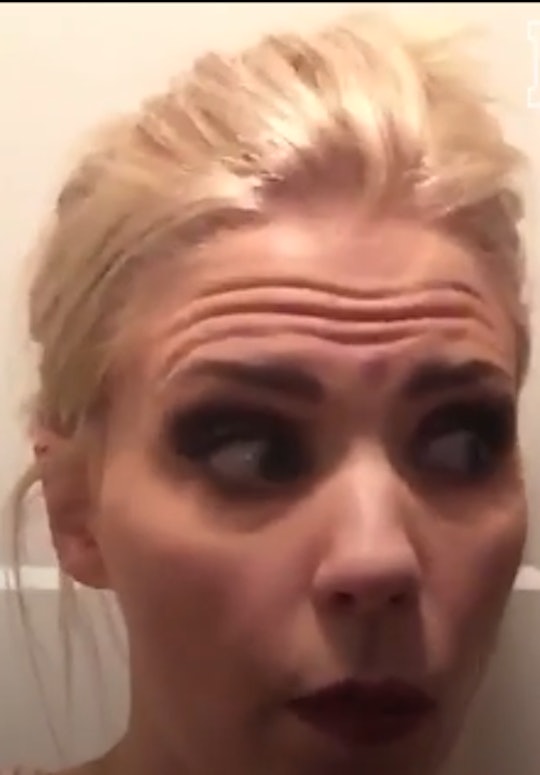 When my four sons were little, I used to fold socks for hours. Not because we had a whole lot of socks (which we did), but because it was something I could do by myself. Something they didn't want to do, a task so far beneath them that they actually left me in peace to go draw on the walls or accidentally spray the cat with Windex or set of firecrackers in the living room. Whatever... I was folding socks. And if there's one mom who gets it, it's this mom of quadruplets who posted a hilarious video about life as an exhausted parent. A short, manic, perfect video that just explains everything about parenting toddlers.

Ashley Gardner of Utah posted a video on her family's Facebook page, Gardner Quad Squad, on Tuesday. She is the mother of four 2-year-old girls, which I think means she gets to call herself an instant parenting expert. Because they are all breathing and in one piece. The video finds Gardner hiding out in the pantry because:

Dad’s out shoveling the driveway and mom desperately needed a treat to get through the rest of the night. So I'm hiding in the pantry eating a treat. Is that wrong?

While Gardner's snacking away on her Twizzler (with that indefinable, wild gleam of exhaustion in her eye most moms recognize all too well), her toddlers can be heard just outside the door. Like sharks circling a sinking ship. As she points out:

They don't ever go away. They want everything you have.

And no big surprise, one of the sweet toddlers is crouching outside the pantry, peeking under the door to find out what her mother is up to. As they do.

If they weren't so adorable it would be downright menacing.

The video has gone viral, as parents all over social media are naturally heaving grateful sighs of relief that they are not the only parents hiding out from their beloved children in order to cling to that last, precious vestige of sanity.

Gardner and her husband, Tyson, have been chronicling their journey as parents of quadruplets Indie, Esme, Scarlett and Evangeline (who are also two sets of identical twins), after eight years of infertility issues. The Gardners are one of four families on a new reality show, Rattled, which premiered in February on TLC.

So sure, the Gardner family might be reality TV famous. But here's the thing about fame; Toddlers don't care. They are relentless, grasping (yet sweet), tireless little creatures who won't stop until they've gotten every last drop of energy out of their parents.

Or stolen their Twizzlers. Either option is fine with them.