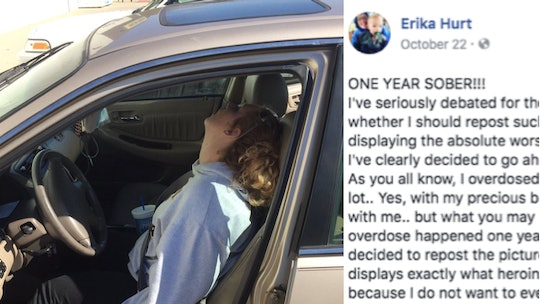 There is probably no one on this earth who likes to have their flaws pointed out to them, especially not in public. But sometimes — especially when one of those flaws is a life-threatening drug addiction — perhaps seeing yourself through someone else's eyes isn't the worst thing in the world. In Erika Hurt's case, it seems as though it was exactly what she needed. This mom spoke out one year after her heroin overdose photo went viral, and she said she was "glad" the photo was shared, in the end. Because it helped her get clean.

One year ago, Erika Hurt of Hope, Indiana, was found behind the wheel of her car. Passed out, head back, and mouth open. A needle clenched tight in her hand. It was an unsettling sight, and certainly not one most people would want shared all over the internet. Especially considering her son was in the back seat of the car, out of the picture.

Nobody would want people to share their own image as a cautionary tale on the internet. But in Hurt's case, that's exactly what happened when the photo was released by police "trying to draw attention to heroin abuse," according to NBC News, in the Indiana town, and quickly went viral amid America's opioid epidemic.

According to CNN, Hurt had overdosed on heroin last October, nearly dying from her addiction. She was reportedly jailed for neglect and drug charges and made national news headlines. Her son, who was just 10 months old at the time, was taken away from her by Child Protective Services and sent to live with his grandmother, the outlet reported. Hurt had hit rock bottom.

But now, she's on her way back up. On the one-year anniversary of that life-altering overdose, Hurt shared a Facebook post to announce she has been "one year sober."

I've seriously debated for the past month, on whether I should repost such a painful picture displaying the absolute worst moment of my life. I've clearly decided to go ahead with my choice. As you all know, I overdosed in my car at a parking lot. Yes, with my precious baby boy inside the car with me.. but what you may not know is, that overdose happened one year ago TODAY! I've decided to repost the picture simply because it displays exactly what heroin addiction is.

Hurt went on to write that she now has her son, Parker, back with her, and she credits the picture taken of her. For the record, the policeman who shared the photo, Hope Town Marshal Matt Tallent, told ABC News that his intention was not to embarrass Hurt; he wanted to educate people on the opioid epidemic.

According to the Centers for Disease Control and Prevention, 13,000 people died in 2015 from heroin overdose; this was a 20 percent increase from the previous year. And on Thursday, President Donald Trump declared the opioid epidemic "a public health emergency," according to CNN.

Hurt could have been another grim statistic, another one of the thousands of people who die every year at an increasing rate from a heroin addiction. But she chose a different path. She chose to look at a literal snapshot of her life, of the destructive path she was traveling towards, and veer away. It's a choice she probably makes every day to stay clean and sober. And it might not have happened without that harrowing photo.