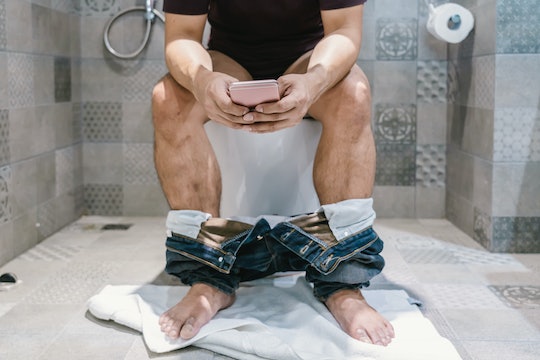 It's a question most couples struggle with when they first become parents: Who does what for the baby and when? In a viral Reddit post questioning whether or not she was in the wrong for how she's handled her own dilemma, one mom admitted she turns off the wifi when her husband hides from baby duty in the bathroom and, as you may have expected, readers have some pretty strong feelings about it.

The mom, Reddit user u/FinalWintersEve, explained in a post on the popular subReddit AITA (Am I The A**hole) that she and her husband had both taken parental leave to stay home and take care of their baby twins. "Anytime my husband SHOULD be doing something with the children (it's his turn for a diaper, a bottle, even just soothing a fussy newborn) he ALWAYS goes to the bathroom first," she wrote. And it's not as though this dad simply runs to the bathroom and returns; according to the Reddit poster, he leaves for around 25 minutes with his phone in his hand and by the time he returns the baby task has been finished.

The woman went on to explain that her husband does take medication that causes him to use the bathroom more often, but once she implemented a "new rule" things changed significantly. "If he is in the bathroom for more than 10 minutes, I flip the wifi off," she wrote. "He has not spent more than 15 minutes in the bathroom at a stretch today, but is extremely upset."

According to the woman's post, her husband insisted she was the one with the issue, so she took to the subReddit "to make sure sleep deprivation isn't [making] me an asshole."

Naturally, the internet had some feelings about this situation, particularly when the original poster explained that her husband spends a considerably amount of "down time" playing video games or working on his car. One user wrote, "Wow, men really just keep finding new ways to ditch out on being an equal partner, huh?" while another chimed in, "NTA, and I can't believe I'm saying that from the title growing up, I used to 'hide' in the bathroom because it was the only place where I could have uninterrupted time to myself. but I was the Overly Put Upon Eldest Sibling(TM) not the parent. parents don't get to hide, bro."

One man had his own way of seeing that both parties were at fault, "Both. YTA because you said 'today I started a new rule.' Talk to your spouse. I'm not sure if he is shirking duties or not, but this relationship feels more mother and son than wife and husband. Punishing him isn't going to magically turn him into a better father. TALK."

Despite the fact that 56% of married couples consider an equal division of household chores "very important" to a successful marriage, according to a study by PEW Research, it remains a serious issue for many people. Another survey from 2015 by PEW Research found that a full 64% of moms felt they were doing the lion's share of the housework and child care duties, whether they both worked full time or otherwise.

In this case, both parents have taken time away from their careers to devote attention to raising their twins. While some people commented that it was not exactly ideal for this mom to make rules for her husband, presumably a grown man, I think many moms can relate to her situation and perhaps feeling desperate for their partner to take on some of the burden.

More Like This
This Underwear-Clad Mom Saved Her Pet Goose From An Eagle While Breastfeeding
This Mom Gave Birth On Graduation Day, So The University Brought Her Degree To Her
Johnny Depp’s Fans Are Harassing His Daughter Lily-Rose Online & It’s Not OK
Lawmakers Passed Two Bills To Address The Baby Formula Shortage