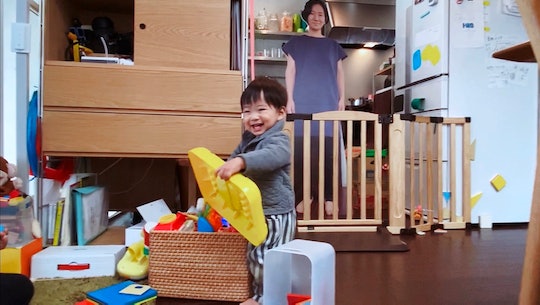 When you're a mom of a toddler who loves you to the point where you can't leave the room for even a second, it can be a bit much. After all, there are things that need to get done in a day other than playing and cuddling with your kid, of course. So if you're struggling with your child screaming whenever they can't see you, you may want to steal this hack courtesy of a brilliant mom who used a cardboard cut-out of herself to her keep her toddler calm. So go ahead and invest in something similar for yourself and watch your world open up with new freedom.

Fuki Sato is a mom of a 1-year-old little boy living in Japan. He loves her. Like, he really, really loves his mom to the point where he apparently has a temper tantrum if he can't see her. So her helpful husband Nezi Sato came up with an idea, as he explains to Romper via Google translate, to simply replace his real wife with a cardboard cut-out of her to see if that would fool his son. He says he got the idea after he noticed that showing his son pictures of Fuki on his Smartphone wasn't quite doing the trick so he thought "there should be a real thing in the space." So he figured he would try a full-size cut-out as a distraction.

According to a video Nezi shared on Twitter that's been viewed more than 2 million times, the little boy was playing in a gated play area off the kitchen. When his back was turned, she replaced herself with the cardboard cut-out in the kitchen and walked away.

The 1-year-old glanced over to make sure his mother was there several times, but seemed to accept the cut-out (which was on the other side of the gate) as his mom. For a full 20 minutes. Just think about what you could get done with 20 minutes of free time.

Admittedly, the cardboard cut-out was pretty professional looking. Nezi Sato tells Romper that he was working for a company at the time that produces and prints promotional tools like life-sized panels, so he figured he would try to make a life-sized mom using the same technology.

Little ones tend to struggle with separation anxiety, and of course we know this is a normal part of growing up. Also this kind of idea would probably not work long-term since cardboard cut-outs can't feed children or hug them. But, in a pinch, when another adult is around, this is not the worst idea to give a mom a chance to sneak away for something quick like a blessed shower alone. So get out there and get a cardboard cut-out of yourself. It's worth it even if it's just for 20 minutes of peace.