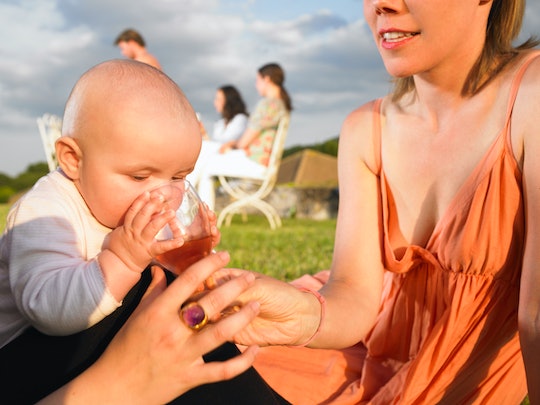 Mom Wine Culture Stopped Me From Getting Sober

One day, when my daughter was barely able to talk, she watched as I put away the dishes from the dishwasher. She pointed to a wine glass and said “Mama’s” then pointed to another one and said “Mama’s” again. It felt a little uncomfortable, knowing she associated me (quite strongly) with wine, but I shrugged it off and laughed. After all, what mom doesn’t drink a glass or two following a long day of parenting?

I had grown up watching my own mother having a couple nightly glasses of vino, so it seemed natural that now as a mother I would do the same. It was a reward for a job well done, or at least a job harriedly survived. It was a welcome signal that the day was almost at a close, that I could relax a little because I was no longer the sole parent in charge. It was my transition. It was transcendence. It was my lifeline.

I wasn’t even loathe to admit that some days I was thinking about my nightly wine while still drinking my first re-heated cup of tea in the morning. When the tantrums started early or I burned pancakes for the umpteenth time (when we had, of course, run out of cereal) or the toddler woke up blissfully late only to have peed his bed, man, was I looking forward to a drink already. I need a drink today, I’d tell myself. I deserve it.

Yet the truth was, wine was not my reward for motherhood; it was my coping mechanism. It was the only way I knew how to relax and not yell for a couple hours. I would sometimes pour a glass a little too early in the afternoon, because the after-school chaos was too much for me. When my kids misbehaved in the morning, I would even voice how much I was going to need a glass of wine that evening, sometimes in front of them.

I rarely drank to the point of getting drunk, but I always drank to keep the edge off, because parenting felt like too much for me. And I never questioned coping this way because everyone I knew was doing the exact same thing. Sometimes I would text my mom friends after a series of midday parenting mishaps, and they would reply that it sounded like I needed wine tonight. I would walk through Target and see rows of slouchy shirts declaring “Mama Needs Some Wine” or “Coffee Days, Wine Nights.” In fact, there wasn’t a mom around I knew who wasn’t drinking, and drinking regularly — and there wasn’t a soul around to suggest maybe it should be otherwise.

Though I’d often feel like crap in the mornings, I never equated my drinking to an actual problem because I wasn’t drinking myself into oblivion.

And in truth, there isn’t anything wrong with a glass of wine or two at the end of the day. It can be a nice way to relax. It can be a signifier of a transition into the evening, a true reward for a hard day’s parenting. But for me, it was rarely a good or even conscious choice. Yet it was hard to realize how dependent I had become on booze when I was constantly taking in messages that said my drinking was not only normal, but it was expected. It was more than OK. It was the only way to be.

When I picked up Ruby Warrington’s book Sober Curious by pure happenstance, it was the first time it ever occurred to me that I could stop drinking without first hitting rock bottom or being a bonafide alcoholic. Though I’d often feel like crap in the mornings, I never equated my drinking to an actual problem because I wasn’t drinking myself into oblivion. I wasn’t pouring whiskey in my coffee (though probably only because I was a tea drinker instead). I wasn’t embarrassing myself while drunk (high school reunion notwithstanding). I wasn’t ruining my life with alcohol, but then again, I kind of was.

I wasn’t present as a parent as often as I wanted to be. I struggled with having enough energy to deal with rough mornings because a couple glasses of wine would give me a low-grade hangover. I’d often go to bed edged just over my limit and hate myself for it. I didn’t feel like I was in control of my life, and my inability to be conscious about my choice to imbibe was a huge part of that.

So slowly but surely, I stepped away from the mommy wine culture that glorified my drinking, at first to prove to myself that I could. To prove that I didn’t have a problem. Yet as soon as I cut back, I realized how hard it was. I would have to fight against the urge to reach for that glass of wine at the end of the day out of habit. I felt anxious and unmoored in the evenings. I had to start learning healthy coping skills, and I’m not going to lie and say it was easy.

But I will say it was worth it, because it forced me to show up for my kids fully. I don’t want my kids to think that I drink because of them, and that’s exactly the message I was sending. I don’t want them to think that drinking is the normal or only way to deal with adult life and parenting. I want them to feel like I do now: like I have a choice. Like I’m in control of my own life. If I do drink again (I’m currently doing a year of sobriety), I want it to be for the pleasure of having a good glass of wine with a special meal or toasting at a celebration, not numbing the experience of life.

More Like This
These Stepmother's Day Instagram Captions Are Straight From The Heart
Stepmom Quotes & Sayings For Every Occasion
This Mother’s Day, What I Hope For Is Resilience
Raising Us Maybe Wrecked Her Career, But My Mom Is Thriving In Her Second Act