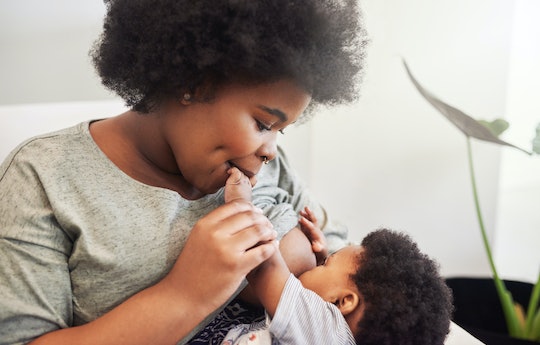 Every mom has presumably experienced it: the frustrating struggle to pay attention. The fatigue. The forgetfulness. That's right, "mommy brain" does exist, but it also doesn't last forever, according to a new study. So there is light at the end of that tunnel you've been staring down as you try to stay awake and remember what you ate for breakfast. Your regular attention span will come back to you.

A new study conducted by the Purdue University Department of Anthropology recently published in Current Psychology attempted to identify whether or not the phenomenon of "mommy brain" lasts. Researchers looked at 60 moms whose children were at least 1 year old and 70 non-mothers to study whether or not motherhood has a long-lasting effect on attention spans.

It turns out the whole idea of "mommy brain" might have a lot more to do with hormones and sleep deprivation in the early days of parenting than anything else. "When you first have a child, you have a cascade of hormones and sleep deprivation that might be affecting attention and memory processes in the brain," Valerie Tucker Miller, a Ph.D student and one of the study's lead researchers, told Purdue University News.

Miller also noted that many studies conducting attention and memory tests on mothers tend to do so in the early days of welcoming a child, when "mommy brain" is affected by extenuating factors.

So what is "mommy brain"? According to Parents, mommy brain tends to make new moms forgetful, emotional, and suffer through shorter attention spans. A 2017 study published in Nature Neuroscience found that women's brains actually lose grey matter during pregnancy, and this tends to cause some of those irritating "mommy brain" symptoms.

Fortunately, this new study found that "mommy brain" doesn't last. When 60 moms performed the same memory and attention tests as 70 women who were not mothers, Miller said that "overall, moms did not have significantly different attention than non-mothers."

"So we did not find evidence to support 'mommy brain' as our culture understands it," Miller explained. "It's possible, if anything, that maternity is related to improved, rather than diminished, attentiveness."

One of the study's co-authors Amanda Veile, an assistant professor of anthropology at Purdue, pointed out that there are plenty of reasons why moms might seem forgetful even if they aren't experiencing mommy brain. "We also believe that 'mommy brain' may be a culture-bound phenomenon, and that mothers will feel the most distracted and forgetful when they feel stressed, overextended and unsupported. Unfortunately, many U.S. moms feel this way, especially now in the midst of economic and political instability and pandemic."

So the good news is, mommy brain doesn't last forever. The bad news is, moms tend to be so busy that it can sort of feel like it does. Ah, motherhood.