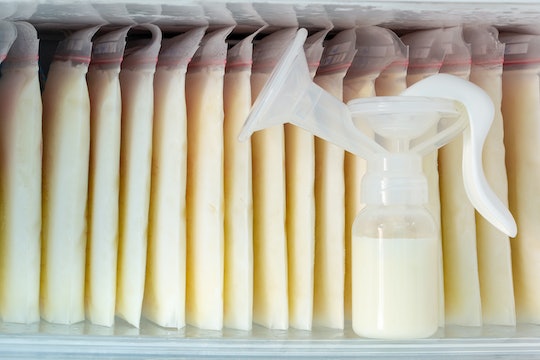 Breast milk is obviously a coveted commodity. In fact, it gets more coveted all the time, as the world becomes more aware of its many magical properties. Despite the fact that it is indeed coveted, breast milk is also a deeply personal thing. Maybe because it comes for your own breasts or something. With that said, every woman should have the right to decide what she wants to do with her own breast milk, and when someone messes with that... well, it's just not cool and that seems to have happened in Canada. According to the CBC, some moms alleged a woman sold their donated breast milk without their knowledge, and this truly can't be a thing. Especially since these moms were trying to do their part to help other moms in need.

One woman in particular, who remains anonymous, allegedly accepted hundreds of ounces of donated breast milk only to turn around to sell it "for profit," according to CTV News.

One of the mothers, Jodi Neibert, told the CBC that she had donated around 650 ounces to this woman, who could have allegedly sold her breast milk for approximately $700. "...I wanted to do something good and help someone who wasn't able to do [what] I could do, to learn she is making money off of me and other good people, it's pretty sad," she told the news outlet.

And she's apparently not the only one; the woman allegedly reached out to several mothers through the Facebook group in an effort to sell their donated breast milk, even resorting to encouraging one mother to take medication to increase her supply, according to the CBC.

The alleged scam finally ended when some of the group's members confronted the anonymous woman on Facebook, who seemingly admitted to selling donated breast milk and apologized for doing so.

"I just read that you've been taking breast milk from people for free and selling it to desperate parents for a dollar an ounce. This breaks my heart! I hope my milk went to babies who really needed it," one mother said to the anonymous woman, according to screenshots of Facebook conversations obtained by Vancouver's NEWS 1130. The anonymous woman replied, "Yes I have been and I'm very sorry about it.. my son was still taking all breast milk until August 2018." In another response, she said, "... I'm very sorry ... I felt like I still needed to provide for the baby that I was selling to."

According to a post on Human Milk 4 Human Babies, the woman allegedly selling donated breast milk has since been removed from the Facebook page and its moderators issued a reminder to mothers about the dangers of buying breast milk, even if it's perfectly legal to do so in Canada, according to NEWS 1130. "And once again we STRONGLY recommend never buying milk as you never know whose milk it is or if it is even breast milk," Human Milk 4 Human Babies wrote on Facebook.

There are human milk banks all across the United States and Canada, according to La Leche League, but some women have been reaching out to donate or acquire breast milk privately since high-risk babies in intensive care tend to take precedence and there could be a limited supply.

I hope this one alleged scammer does not change all that is good and generous and kind about the concept of women freely donating breast milk to each other. But from the looks of the recent activity on this Facebook page, it seems like its moderators are committed to keeping it a positive and helpful resource for fellow moms.