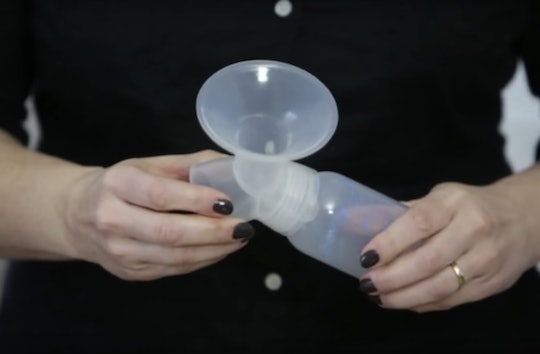 Sometimes I wonder if people forget that there is this thing called the internet, and it can sometimes be a forum for people to share embarrassing examples of bad behavior. Because that's a thing these days, you know. People who work in customer service might want to remember this little tidbit: if you're prepared to be a jerk to someone, be prepared to have the whole internet find out. Case in point: This mom's breast pump photo went viral at a hotel in San Francisco. Why? Because the staff were reportedly running her in circles and she called them out on it.

Lynda Mazzalai Nguyen was at a seminar at the Embassy Suites by Hilton near the San Francisco airport, and she needed to get some food ready for her baby. Food that comes from her breast (will wonders never cease?). She asked for a private space at the front desk where she might be able to plug in her breast pump for 15 minutes or so... but nope. According to Nguyen's epic Facebook rant, she couldn't get any help at all and was allegedly told by two different people to use the washroom to pump:

I told them they don't eat lunch in the bathroom, so it's gross to expect me to contaminate baby's milk in there.

Despite the fact that she didn't want to pump in the washroom (and for anyone who thinks of this as an option consider this; would you ask someone to slice cucumbers for their toddler in a washroom? No? OK, moving on), Nguyen said the staff allegedly continued to be obstinate. Even when she offered options like using an empty hotel room for a few minutes, or an office or a conference room, they reportedly refused to budge. When the staff finally offered to allow her (reluctantly) the use of the wine cellar, Nguyen decided she would pump in the middle of the lobby instead:

Based on principle, I decided to pump in the lobby next to reception. F**k you, @embassysuites, I'm livid. I spoke to the GM and expressed their need to train their staff, and reiterated how appalling it was to be quickly dismissed without any attempts to accommodate my need and offered a bathroom because sir, you don't eat where you s**t, so why should my baby! He apologized profusely. Do NOT piss off a mama who knows her rights and is a social worker to boot!

While the Embassy Suites by Hilton at the San Francisco Airport could not immediately be reached for comment, I feel confident that the next time a mother needs to use a quiet conference room to pump, its staff might try a little harder. Especially when they get a gander at the comments about Nguyen's photo.

Nursing mothers have rights! To tell a nursing mother she must pump her babies milk on a toilet in the public bathroom is appalling. I am in utter disbelief that a woman was treated like a second class citizen just because she needed a place to express milk for her infant. Shameful doesn't begin to describe the behavior of this staff. I will definitely never stay here or recommend this hotel.

Another commenter, Sarah Kader, seized on the moment to voice her concerns and protest Nguyen's treatment:

I would never book an event at this hotel, and if I ever had to attend a seminar or conference here, I would tell the organizers why I would not register for their event here. I've attended seminars at other hotels, and they have made conference rooms available for me to pump. I've even had management open an empty movie theater for me to pump once.

Whatever the case, the hotel so far has seemingly remained silent on the issue. Well played, internet. Well played.