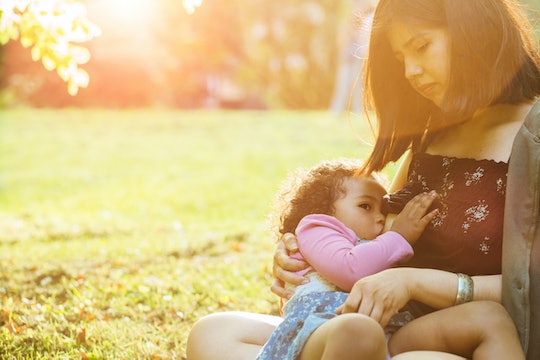 6 Things Other *Women* Can Do For Moms Breastfeeding In Public

A parent is allowed to nurse their child anywhere a parent and a child are legally allowed to be. But that doesn't mean moms breastfeeding in public don't need — and deserve — support. The truth is, the legality of breastfeeding doesn't stop people from giving moms dirty looks, telling moms to cover up, or insisting they stop feeding entirely. And, unfortunately, a lot of those people are other women.

In a 2018 study published in International Breastfeeding Journal, 72% of the 300 women surveyed said they should be able to breastfeed in public. But 13% believed it wasn't appropriate to publicly breastfeed, and 31% said they felt uncomfortable watching other women nurse in public. It's not just men who are shaming, judging, and trying to discourage moms from breastfeeding in public. It's women, too. In a 2019 survey of 1,000 people conducted by Aeroflow, 25% of women believe it's inappropriate to breastfeed or pump in public, compared to 22% of men.

I breastfed my first child until he was almost 3, and I'm still feeding my second child, who is 2. I've breastfed on buses and in museums, at Shabbat services and at schools. I've fielded questions, received judgmental glares, and have weathered demands that I stop, from both men and women. Thankfully, I've also received a lot of support, from moms, dads, grandparents, and people who've shared with me that they have chestfed, breastfed, and formula-fed. In the end, it honestly doesn't take much to support a mom breastfeeding in public. But, as moms, we do need other women to step up and be there for us in the following ways: