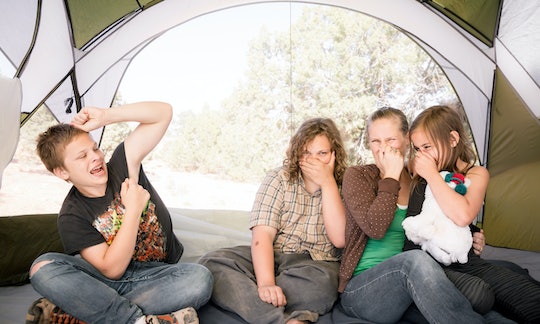 If you think teenagers sometimes emit an, umm, off-putting odor, you're not alone — their moms probably think their smell is a bit different, too. According to a new study from the Dresden University of Technology in Germany, moms can smell their kids' development as they transition into puberty. Just when you thought moms couldn't possibly have any more super powers, here we are.

Researchers from the university asked 164 volunteer moms to come in and have their noses tested in an effort to discern if they could detect differences in their child's development based on smell alone. The German moms were given t-shirts and onesies of their own children and four other children of the same age and sex who ranged in age from infant to 18 years old. The idea being that the body odor lifted from the garments, all of which were slept in for the night, would emit an odor and the mothers would identify what stage of development the child who wore them might be at.

The results of the study, which were published in Frontiers Psychology, found that mothers could identify the stage of development of their own child 64% of the time based on that smell alone.

Interestingly enough, it seems moms scored even higher when they were smelling their kids' clothes if they were prepubescent. Moms could sniff out their own child's potential development and pick up on the subtleties of those odors than they could with any other child. The study also found that mothers identified less pleasant smells with puberty, according to Laura Schäfer, lead author of the study, noting that the negative attachment to pubescent smells could be considered a detachment mechanism as children grow up and away from their parents, while the way children smell as babies fosters protection:

"This suggests that infantile body odors can mediate affectionate love towards the child in the crucial periods of bonding," Schäfer explained of the research. Of course, the smell association works two ways: babies can also smell their moms and recognize them at a distance.

Smell is one of the most visceral, primitive elements of the mother-child bond; that newborn baby smell is so addictive to moms that Smithsonian magazine wrote it has the same reward centers as drugs. So it makes sense that the smell would shift and change for moms, growing less pleasant as their children phase out of their dependent years into adulthood.

If only moms could bottle a little of that newborn baby smell to get them through the wrenching transition. This would be science worth its weight in gold.

More Like This
Ginger Zee Had A Perfect Response After A Troll Asked Her "Who's Raising Your Kids?"
It's A Beautiful Day In Jenny Slate’s Neighborhood
Megan Fox Explains Why She Asked Machine Gun Kelly If He Was Breastfed As A Baby
Sarah Levy Reveals Birth Of Her Baby Boy & His Name Is A Sweet Tribute To Her Dad