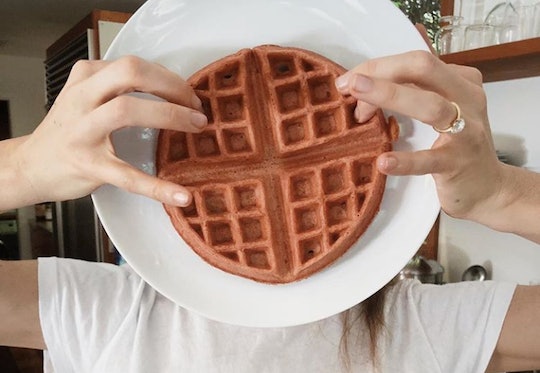 Meal Trains Are A Radical Act Of Care By Moms, For Moms

It’s been a year and a half since I cooked my first meal for a new mom — a lentil casserole with a pastry lid. I was eight months pregnant with my second child, and instead of rising, the puff pastry had sunk down over the lentils like a damp pool cover. In desperation, I sliced out a couple of triangles from the remaining dough while barricading the oven from my toddler, baked them into puffy wedges, then wrapped them up in foil and hustled out the door.

“I can just, uh, pop them on top,” I said as I arranged the stray triangles into a Memphis design on the lentils in a strange apartment. The mom looked serene with her newborn, watching on quietly from the floor as I sweated and fussed with Tupperware. “It gets so much easier after 12 weeks,” I told her, pushing my hair out of my face with my wrists. “You have absolutely got this.” I coughed into my elbow.

I joined a neighborhood meal train just before I had my son, thinking I could do a better job of creating a support system the second time around. I spent my first maternity leave hiking from meadow to meadow in Prospect Park with my infant daughter, carrying on spare conversations with her while striding through dappled sunlight like we were characters in a Terrence Malick film, and taking occasional expeditions to Target. I was happy in my bubble, just me and my daughter, but wanted more community the second time around.

For some reason, I thought the meal train would be a bunch of older nonnas with grown children fussing over new moms — inducting us into some witchy intergenerational society of matriarchs or teaching us how to make a quilt while mining their pasts for stories about their sexual coming-of-age, but it was young moms cooking for young moms. Of course.

You would deliver some meals before you popped, receive maybe eight or nine meals after you had your baby, then jump back into service, hauling cooler bags over your shoulder and your baby on your chest as you marched around the neighborhood sweating into your Ergo.

“Here’s one I made earlier!” you would joke to a mom with a tiny newborn clawed onto to her boob while showing off your baby’s neck control. You were there to check in on the mom, if not provide her with some Tate's cookies. There to reassure her that yes, those epic cluster feeds do pass.

The only people who aren’t working are, naturally, the other moms on maternity leave. So they end up cooking for one another.

There isn’t much postpartum support for women, beyond the six-week checkup with your OB. Other countries offer government-run mothers’ groups; home visits; and specialty lactation, sleep, vaginal-recovery, and parent-child attachment health services. But here, the only people who aren’t working are, naturally, the other moms on maternity leave. So they end up cooking for one another.

My cooking has, let’s say, suffered since my first child. The expansive Morimoto, Noma, and Momofuku cookbooks in our apartment are relics from an era when taking six hours to make simple steamed buns or a home-ground bebere spice mix seemed reasonable on a Saturday. Now a typical meal might involve chickpeas sprinkled with “Caribbean seasoning” and left in the oven until they form barnacles on the bottom of the cake pan.

My first meal drop after having my son was a congealed sesame udon salad that crawled from my bowl into the mom’s serve-wear in one go. “It will look nicer if you sprinkle some sesame seeds,” I told her, adding, “this is from a recipe.” Her son was the same age as mine — just eight weeks at the time, but for whatever reason I felt ready to hop back into action — it was my second child, so I should have it down pat, I thought. “And the piece de resistance,” I announced, “unwashed bodega grapes.”

The concept of the meal train is like one woman doing a c-section on another because she has already gone through it and is like, "If you honestly have no one else, I was semi paying attention and can prob figure out how to do it!" That does, by the way, accurately describe the advice passed between new mothers: "Plugged ducts and a stinging case of mastitis? That was me three weeks ago. Get antibiotics, drink a bunch, and tell the doctor to shove off if they suggest combing the lump out with a wide-tooth number."

I can barely keep up with the demands of the meal train, but I love it. It means I'm trying to care about someone other than myself and my kids (really also just about me).

Frequently, as I drop off a bowl of boiled lentils disguised under some pine nuts and almond slivers, I’ll remark to myself that the new mom is doing better than me at eight months, ten months, now a year and a bit postpartum. I’m always a bit worried that the potatoes will be too binding, or the pie crust too short — as if my method of cooking with two small kids isn’t simply waiting for the fire alarm to go off.

I wonder if it’s not getting harder to cook the older my baby gets. How do these women do it?

A year after the first delivery, I go to bake a pie because I’ve ended up with an unholy amount of apples after a scenic trip “upstate” (actually just Westchester but I live in Brooklyn, so) and find I don’t have a dish. Tupperware and pie dishes are scattered around the neighborhood — I still have a copy of Bringing Up Bebe I borrowed from a new mom 18 months ago. We’ll all have a hangout soon, I think. Just as soon as I get it together. I wonder if it’s not actually getting harder to cook the older my baby gets — where I once had to just sort of block the oven from roving toddlers, now I have two children whose favorite activity is inserting things into the toaster. When I babywear my almost-3-year-old around the neighborhood, we look like one of those acroyoga families — it's a sort of notable feat of balance and leverage — so bringing a kid as well as a cooler bag and sense of chill is getting really effing hard.

How do these other women do it?

One of the local moms is a postpartum doula and whisks up medicinal oxtail stews seemingly by magic each time there is a new baby in the neighborhood. “How?” I ask her one day. She tells me that the rest of the time, her family lives on frozen Dr. Praeger burgers. “Oh thank god,” I say.

And so I try to cook. I beat on, a boat against the current of Heidi Swanson Instagrammary.

“How is it?” I ask one night as my husband and I eat the second half of a voluminous chowder I rushed together for a drop.

Later the same night, a mom emails the meal train about her latest drop. “So blessed to meet this lovely family! With heart, X” she signs off, two kids deep and still cooking with regularity.

It's her signature sign-off.

That’s the point, I think, as I take another bite of my terrible homemade lasagna.