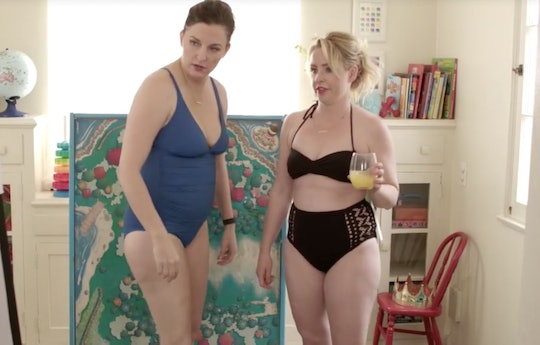 These Moms Critiquing Bathing Suits Are Too Pure

I have not yet lost the baby weight from my youngest son. Now that he's 16 years old, I'm starting to think it's time to accept that this is the me I will be forever. Which makes swimsuit season a real joy, as most moms know. It's a Russian Roulette of "which body part do I want to hang out and which do I want covered," because you can't have it all. I've tried, you just can't. It's irritating and offensive, the way these bathing suits are built. And finally, these moms discussing bathing suit options so perfectly addressed what most of us are feeling. Poop emoji enabled.

Kristin Hensley and Jen Smedley, the genius moms behind the wildly popular I Mom So Hard Facebook video series, decided to tackle a subject near and dear to this mom's heart: bathing suits. Or perhaps, more specifically, the vast chasm between what men wear to the beach and what many women feel they're expected to wear to the beach. In fact, the two open up the video in baggy shorts and t-shirts, saying "This is what dudes get to wear to the beach." They then proceed to show us how much easier it is to move about and get stuff done without worrying about stray body parts popping out unexpectedly. And then they move on to bravely model the latest bathing suit trends for us.

(You can watch the full video on the imomsohard Facebook page.)

Smedley and Hensley freely admit that "nobody's ever died from a swimsuit" (although Hensley went on to note that she believed the female cast members of Baywatch probably sustained a few interesting injuries to their nether regions brought on by "the ribbon" that was pretending to be a gusset). Still, moms could use some practical bathing suit options for the beach — suits without intricate strings, cut-outs that make our bellies look like "frowns," or a teal monokini that Smedley noted manages the classic trifecta:

Hmmm, I wonder if there's a way to make your butt look too big, to really accentuate your love handles and make your bust feel inadequate?

The suits are ridiculously ineffective for a mom on the beach who is trying to get s--t done and have a good time doing it, according to the caption on the duo's Facebook page:

When I'm at the beach, I'm there to lifeguard, build sandcastles, supply treats, re-stand the umbrella every dang time it blows over, spray sunscreen, drink a beer, look for seashells, warm-up wet kiddos, force people to eat sandwiches and drink juice, blow up water-wings, and keep my son from publicly urinating. Basically, I've got a really fun job to do and I don't have time to let a piece of lycra throw me off my game.

Clearly, other moms are fed up with being thrown a swimsuit curve ball as well, given that the video has been viewed more than 13 million times and been flooded with positive comments from women who have thrown in the towel trying to find a trendy bathing suit and just focus on enjoying the water instead.

Love love this post. I am always the heavy lady on the beach but I just keep saying in my head I'm here with my kids to enjoy every minute with them. I'm not going to show them I'm hiding and escaping life so I strap on the ugly Lycra and sorry folks but move on over Momma' coming to the beach... lololol

66 years old. 260 pounds. And I squeeze every one of them into a 3X and go to the pool every single day. It's not about what other people think. It's about being out in the sun in the water and enjoying the company of whoever is around. You don't have to worry about anyone but YOU.

I had almost forgotten the point of going to the beach before this video. To, like, swim with your kids and stuff. To frog leap and act like a goof and body surf and not think about how you look because who cares? Really... who cares? Not these moms. They're "building a moat" regardless. And so shall I.