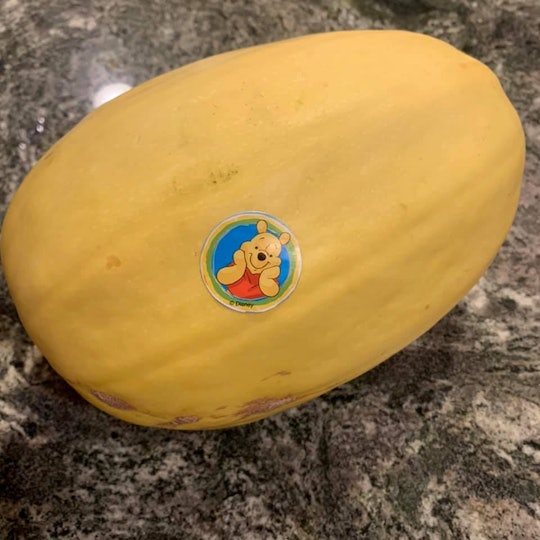 Trying to get kids to eat their vegetables is the raison d'etre of parenting. A challenge most moms and dads face on a daily basis. Not any more, my friends, because one mom's hack to get her kid to eat his veggies is actually very simple and may be as effective with your own little ones.

Jane Stine, who'd been living in Chiang Mai, Thailand for four years before moving back to the United States, tells Romper that she couldn't help noticing when she brought her son to the grocery store in the United States that a lot of products had branded stickers on them, stickers that didn't necessarily apply to the product. "A few weeks ago we bought a pineapple with a Frozen 2 hangtag and I was like, 'This has nothing to do with a pineapple,'" she says.

The sticker might not have made a whole lot of sense to her, but it did lead to a serious a-ha moment. "Here’s my best parenting hack," she wrote in a now-viral Facebook post shared earlier this week. "You know how kids always want Paw Patrol yogurt or Disney waffles or whatever? Bring your own stickers to the grocery store and start sticking. Today we’re having Winnie the Pooh brand spaghetti squash. It goes perfectly with Toy Story broccoli."

Stine's idea to add stickers to vegetables to make them more appealing to children has actual scientific merit. According to Live Science, a 2012 study by Cornell University found that children were more likely to choose a piece of fruit for their snack if it had an Elmo sticker attached to it. Certainly other parents appear to agree with Stine's method; her post has been shared more than 104,000 times on Facebook and has attracted over 14,000 comments. "oh. My. God. Genius," one parent commented, while another said, "that's some A+ parenting advice there."

Stine tells Romper that when she started putting Toy Story stickers on items around the grocery store, "it made my son have a lot of fun picking them out and let us focus on getting the items we wanted instead of getting distracted by packaging." And there you have it: a simple hack that works on so many levels.