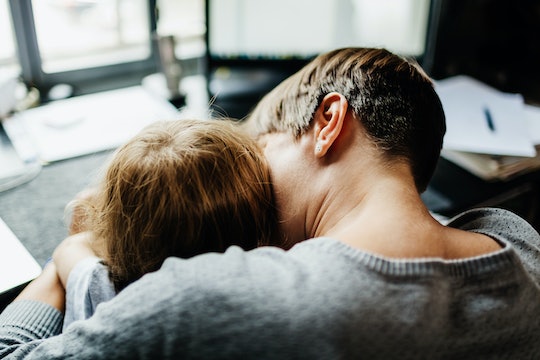 A Mom Says She Was Fired Because Of Noisy Kids — Are You Surprised?

Between the lack of child care and juggling work and family responsibilities, the ongoing coronavirus pandemic has been harrowing for many parents and one California mom's experience has resulted in a lawsuit. Drisana Rios, a mother of two young children from San Diego, alleges that she was fired because her children were noisy during conference calls while she was working from home and her supervisors were "tired of accommodating" her situation.

Like many working mothers across the country, Rios had been in a push-pull situation where she had to provide care for her children while also working from home due to lockdown and stay-at-home orders. Rios had been working as an account executive for her former employer HUB International since August 2019. In a lawsuit filed in the Superior Court in San Diego County, Rios alleges that her boss became frustrated with hearing her kids during work calls with clients.

"We can't keep accommodating your work schedule. We can't have client calls with kids or noise in the background. No other Account Executive on the team has this issue. Your role as an Account Executive is to be present for our clients, so you need to take care of your kid situation," Rios alleges her boss told her in the lawsuit.

"I don't know what you mean with 'take care of my kid situation.' Do you want me to lock them in a room or something? I can't do that," Rios told her boss, according to the filing. "Figure it out," her boss allegedly replied.

In a viral Instagram post shared last month, Rios said that she'd "finally had enough of the discrimination that my boss was giving me for him not being okay with hearing my kids in the background on calls" and ultimately took her concerns to human resources. "I have worked around the clock from home while watching my two toddlers," Rios wrote. "I have met all the deadlines they have asked me for, even the unrealistic ones." According to Rios, she was let go one week later.

"How does a company that says that they understand and will work around the schedule of parents do the complete opposite with their actions? I’m devastated," Rios wrote on Instagram. "I have poured hours, tears, sweats, delayed giving my child a snack when he wanted one because my boss needed me to do something right away."

In a statement to Romper, a spokesperson for HUB International says "while we can’t comment on pending litigation, HUB is proud to have successfully transitioned 90% of its 12,000+ employees to working remotely from home throughout the COVID-19 pandemic."

Rios' lawyer, Daphne Delvaux, tells Romper via email that her case includes gender discrimination because Rios' manager was allegedly "tolerant towards a father who did not receive comments about his children being home."

When Rios shared the distressing news that she had been fired on Instagram, parents, particularly fellow mothers, quickly rallied around her. One mother commented on Rios' post that "this is an absolute injustice," while another called her experience "disgusting."

"Reading this made my blood boil. I'm just so fed up with the way moms are being treated," one mother commented on Rios' post. "Keep strong and keep fighting, mama! You got this, and all the moms got your back."

"Absolutely ridiculous!!! I hope you find the justice you deserve you beautiful Mama!!!" another commented.

Ultimately, Delvaux tells Romper this lawsuit is about "taking a stand for mothers and saying, 'No more.'"