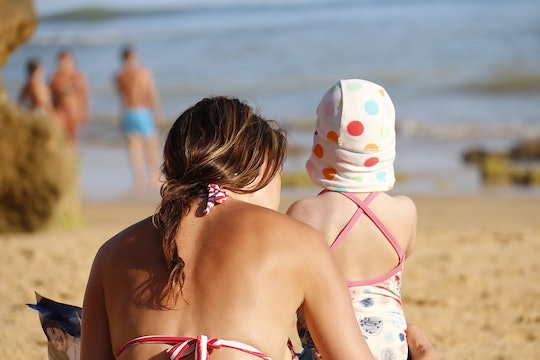 This Mom Got Real About Body Image With Her Daughter

I remember once being in a fitting room in a lovely store. Trying on dresses, cute tops... just generally having a gay old time on my lonesome. Until I heard a young girl in the next fitting room over. Her mother was telling her they were both the kind of women who would need to wear Spanx so their fat parts wouldn't stick out. The kid was trying on a junior prom dress. She was happy. Until she wasn't. I wish she could have heard this mom's message about positive body image that day. Maybe it would have helped both her and her mom come to the same conclusion that Brittney Johnson had while bikini shopping with her daughter; parents act as mirrors. And it's up to us to decide what we want that mirror to reflect back on our kids, perhaps especially our daughters.

Brittney Johnson of Missouri had taken her daughter to her local Target to try on bathing suits. Her little girl had helped her choose 11 suits, and the two of them headed to the fitting room to try them on. Johnson was snapping selfies and sending them to friends for feedback, the typical "Yes or No" we all probably do. When she noticed her little girl was trying on a cheetah print bikini top. She waited for her daughter to see herself in the mirror... and this is what the little girl said, according to Johnson's post on Facebook:

And that was when it hit Johnson:

she only says what she hears. What she sees. I tell her that she is beautiful every single day. She is kind walking through the mall, because I tell her she is kind everywhere else. She is polite at the order counter because she hears me when I'm polite to strangers everywhere. She gives compliments to people she doesn't know because she loves how it feels when she hears them.. And when we are in a dressing room, with swimsuits of all God forsaken things, there is a split moment when I have the power to say "wow I have really gotten fat this year" OR "wow I love this coral color on me!" And those are the words burned into my daughters brain.

Johnson's post on Facebook has since gone viral. It's been shared more than 159,000 times and sits at 306,000 likes. She tapped into an important message, for women who were raised by mothers with poor body images and for mothers unconsciously raising their daughters the same way. Johnson understand that she won't be able to shield her daughter from negative advertising that perpetuates an unhealthy body obsession. But she plans to combat all of that outward influence with three little words: "Be an example."

I hope that mother and young girl from the fitting room see Johnson's post. And I hope it helps them. As it helped me.