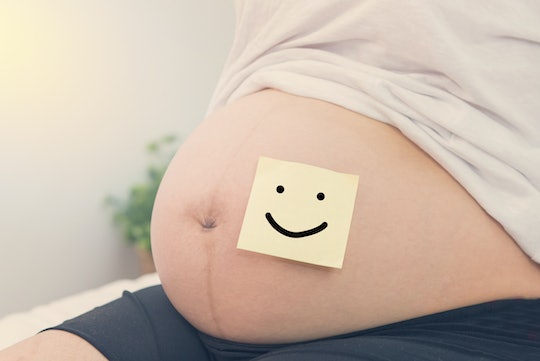 If you're pregnant or are planning to get pregnant, I think you should really consider heading on over to Reddit to get a glimpse of what the experience actually looks like. Perhaps start with a post about one mom's self-defined "most pregnant moment" because it might be one of the more honest stories I've read about pregnancies. And I've personally done it four whole times, so that's saying something.

Reddit user u/elizabif recently shared a particularly visual story with Reddit users who are part of the sub group Baby Bumps. She wanted to reach out with her "most pregnant moment" for other users to mull over, and I have to say it was a good one. "I was in a meeting taking notes for a topic I am heavily involved in, which meant I had to stay throughout this episode," she began. "20 people in the room, 20 people online."

Of course, your pregnancy doesn't put itself on hold simply because you're in a professional situation. That's not the way these things work. And for those of you who aren't pregnant, you should know that carrying a baby inside you can cause some pretty interesting things to happen to your bodily functions.

For this pregnant woman, it seems she was having some difficulties with several bodily functions happening at once. "I sneezed and burped at the same time," she wrote, "which caused me to throw up like a tablespoon in my mouth, which I then hastily tried to swallow, but then choked on it, peed myself a little, and proceeded to cough for the next ten minutes and when I had to ask a question it sound like I had been a pack a day smoker for the last fifty years. F*ck."

Perhaps not her finest hour, but certainly other pregnant women could relate. As one Reddit user wrote, "I feel ya. almost sh*t myself twice today. NEVER TRUST A FART!" Another noted she had struggled with several bodily functions all firing at once, "Omg, this is SUCH a pregnant moment. My favorite pregnancy moments have been puking in a bag while peeing on the toilet and crossing my legs to sneeze in Buy Buy Baby only to sneeze so hard that I bruised my ribs and still peed myself a little. Such a beautiful time in my life."