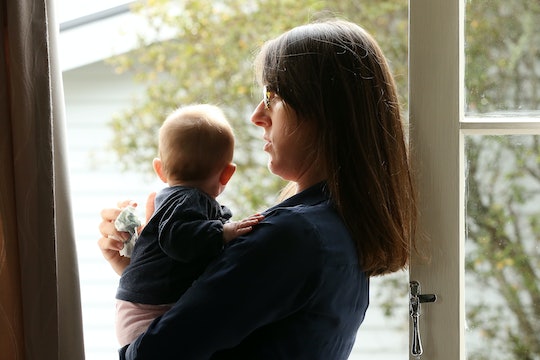 When it comes to paid parental leave, America lags behind the rest of the world for sure, with no federal law regulating the practice of giving new moms and new dads time off to care for themselves and their newborn. But that time off is essential, especially since a new study shows that moms need a full year to recover after giving birth, which blows all of the old myths out the water. The new study isn't just about parental leave and bonding with baby, either — it's about giving a woman's whole body time to recuperate. Dr, Julie Wray, of Salford University in England conducted the stud by interviewing women at different stages of post-partum life and concluded that the standard six week recovery period is a total "fantasy," according to The Daily Mail.

It's not just physical recovery, either, but also mental. Wray found that recovery really starts in the hospital. Back in the day, women would spend more time in the maternal ward learning how to take care of their infant and getting breastfeeding advice. Now, some women are discharged as early as six hours after giving birth and expected to just go with it, according to Wray's research.

"The research shows that more realistic and woman-friendly postnatal services are needed," wray noted. "Women feel that it takes much longer than six weeks to recover and they should be supported beyond the current six to eight weeks after birth." But that can be hard to do, Wray says, given health department budgets. "Government funding cuts and a national shortage of midwives means that postnatal services will only face further challenges," she said in her statement.

Wray's findings are in line with another recent study by the U.S. Preventive Services Task Force (USPSTF) that found women who receive longer and more personal breastfeeding education stick with it longer and face less emotional and physical problems. Both of these studies show that new moms need a lot more care than governments and hospitals are currently giving them. Then again, experiences vary.

Cultural pressure — like heading back to work as soon as possible and getting a "normal" body back — only make this worse. Making paid parental leave from work might be one of the first steps in normalizing the very real (and now scientific!) experience of needing time to adjust to such a major life change.

The chances that the United States will pass a federal law mandating parental leave don't look hopeful right now, but more and more private companies are extending their paid leave offerings. Three or four months isn't really enough anymore. Hopefully parents and politicians will start asking for more time and support on all levels, from the hospital to the board room.