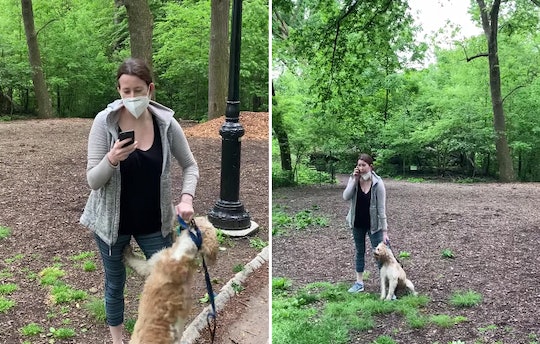 "I Am Truly Scared": Moms React To Video Of White Woman Calling Cops On Black Man

Mothers are expressing their anger, fears, outrage, and concerns after a video of a white woman named Amy Cooper calling the cops on a black man who was enjoying a day of birdwatching in Central Park — telling 911 operators that "an African-American man is threatening my life" after a dispute about a dog leash — went viral.

Christian Cooper (no relation to Amy) wrote in a viral Facebook post that he informed the woman that dogs "have to be on the leash at all times" in the Ramble, a wooded area of Central Park, pointing to a nearby sign. The woman reportedly refused to abide by the rule, a verbal argument eventually ensued, Christian Cooper started recording her, and she called 911.

"Sir, I'm asking you to stop," she says as Christian Cooper begins to film. "Please don't come close to me," he responds. She threatens to call the police and Cooper tells her to "please call the cops."

"I'm going to tell them there's an African American man threatening my life," she says.

The woman is then seen calling the police, telling them "there is an African-American man... recording me, threatening me and my dog... please send the cops immediately!" The woman eventually leashes her dog and Christian Cooper says "thank you," stops filming, and then walks away.

Since the video was shared on Monday, millions of people have seen it and have been outraged. Amy Cooper's employer, investment company Franklin Templeton, has since fired her, saying on Tuesday that they "do not tolerate racism of any kind."

Amy Cooper has also issued an apology. "I sincerely and humbly apologize to everyone, especially to that man, his family. It was unacceptable and I humbly and fully apologize to everyone who’s seen that video, everyone that’s been offended…everyone who thinks of me in a lower light and I understand why they do," she said in an interview with NBC News. As for calling the police, she said she thinks of them as a "protection agency," but realizes now that "there are people in this country that don't have that luxury."

Apology or not, the damage has been done, particularly among mothers who are already concerned about this sort of intentional racism and the implications it could have on their own children in one form or another.

One mother of a black teenager wrote that she was "truly scared" by the "potential outcome of that call." "She knows the potential outcome of that call yet she made it anyway," Amara Akpan tweeted on Tuesday. "She was not being threatened, only being asked to do the right thing. As the mother of a black teenager...I am truly scared."

Another mom took to Twitter to remind people that the Amy Cooper situation was not the exception. "Amy Cooper is not a rare exception. This ish is pervasive," Kristen Howerton tweeted. "Yesterday one of my black teens was accused of flipping a neighbor off when he flashed a peace sign. Last week my other son was accused of assaulting his brother and 'fleeing the scene' while they were jokingly wrestling."

One mom was so frustrated with the video because this sort of thing is exactly why she has to talk about racism with her kids. "I rarely use the word 'hate' — but I hate #AmyCooper — I'm the mother of black kids & women like her are the reason we have to have 'the talk' with our kids — we are not viewed as equal in 'Merica," she tweeted.

One young man shared a screenshot of a worried text he had gotten from his mom after she saw the video, making sure he's OK. "#AmyCooper foolishness has my mom texting me out of worry. 'There’s a black man threatening my life,'" Bruce Williams captioned a screenshot of a text from his mom. "Nature is relaxing, for everyone to enjoy. Please, be aware that our actions or non-actions can be a direct result in someone keeping or losing their innocent life."

The video of Amy Cooper calling the police had one mom of black men "in tears" over her fears for them. "Do you know how incredibly *hard* it is to be a mom of black men?! I can't even explain it. This #AmyCooper video has me in tears at midnight," she tweeted. "I had to fall on my knees in prayer for them. My sons are so caring and naive. The racism is real."

"My worst fear as a mom: people like #AmyCooper who will weaponize my son's Blackness against him and count on others to discount his honesty and humanity for the same reason," another mom wrote.

Another mom named Yasmeen Hayes wrote, "We are sick and tired of having our very existence seen as a threat. When are people going to realize that your privilege is not mine? As a mom of boys that ONE CALL can kill. White people be allies not adversaries."

One mother named Elizabeth McLaughlin urged white moms to start "actively talking to your kids about how to be antiracist."

"White moms, if you are not actively talking to your kids about how to be antiracist, you need to get going," she wrote. "We have always been part of the problem. We have a chance to break that legacy. I’m horrified by Amy Cooper and all of her ilk. And let’s not forget: hate is taught."

Infuriatingly, this type of confrontation is in no way unique, even in 2020, and that's why Christian Cooper quickly took out his phone and hit record. "I had the choice of either capitulating to this racist spin she was going to try to use to alter my behavior," he said in an interview on Tuesday with Newsy. "Or I could continue doing what I was doing, which was recording her scofflaw behavior on my iPhone."

The sad and repulsive reality is that the outcome of this call could have been much different and much more devastating and mothers' fears and outrage reflect just that. As Christian Cooper told NBC New York, "It’s not just about her. She tapped into something that's pervasive in our society that we all really need to address. We need to start treating each other as 'us' rather than as 'other.'"