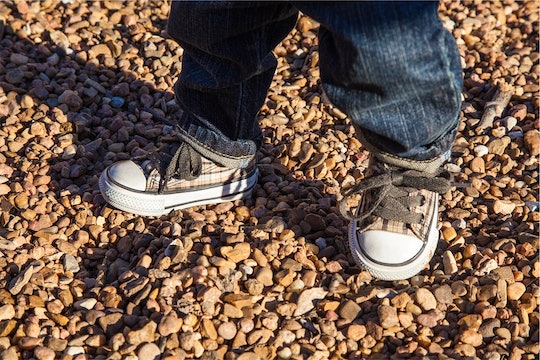 Mom's Shoe-Tying Tutorial Goes Viral For All The Right Reasons

I'm sure you guys remember how hard it was to learn how to tie your shoes; I know I do. And as hard as it was trying to keep my shoes tied up as a kid, it was even harder teaching my own kids. One of my sons (who shall remain nameless) still struggles with it; That whole bunny ears thing never sat right with him. Maybe if I'd had access to this mom's viral shoe-tying tutorial, the poor kid wouldn't favor slip-on canvas shoes so often.

Kristin Johnson of The Unstoppable Mother blog was looking for a way to teach her son to tie his shoes. He was struggling with the complicated bunny ear, loop-de-loop system and his mom wanted to help him. So she did what so many moms do; she came up with a new system that made more sense to her son. Sure, it might take a little longer but that's what moms are for, right? Plus, her son was getting ready to start the second grade (also known as the big boy grade), so these milestones can feel pretty important.

Luckily, her son took to Johnson's new way of tying shoes like a duck to water. She shared the tutorial on Facebook Live... and the simple shoe-tying tutorial now sits comfortably at nearly 6 million views.

So why exactly did a simple, short, shoe-tying tutorial go viral? Well, it turns out Johnson's method of shoe-tying was actually really helpful for parents who have been trying to teach their autistic children how to tie their shoes.

I tried this with my 11 yr old (who has autism) I've never been able to teach him. THIS WORKED!!!!! You have just saved us a school years worth of frustration!!! I owe you.

"Wow, thank you for this video," Facebook user Rhonda Klein Tate also wrote. "My son is 14 and has autism so he has so much trouble using his fingers. This will be easy for him."

Another user noted, "My son is 14, and has a diagnosis of Autism. He struggles with fine motor skills. However, this is not a way we have tried yet. So, Thank You for posting this."

Johnson was a phys-ed teacher until seven years ago when she resigned from her position to raise her son and start her own business. While she received a pretty weird amount of angry comments (it was a tutorial about little kids tying shoes, right), for the most part, parents were excited to offer their kids a different way of learning to tie shoes.

At the end of the day, knowing how to tie up shoelaces is going to feel like a major win for kids who are struggling. So well done.