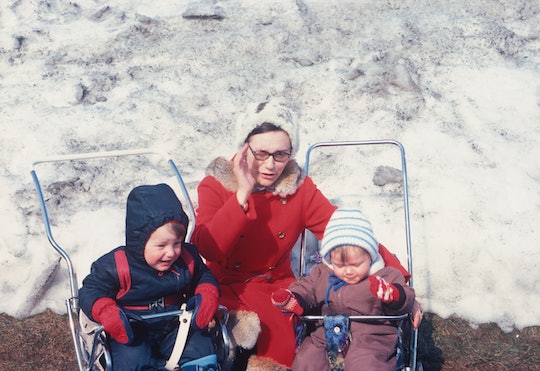 By now you have seen or heard about the ad placed by a CEO for a household manager/cook/nanny — a 1,000 word, super-detailed, extremely demanding job listing (necessary qualifications include “likes river-swimming”) that appeared on a Google jobs board and went viral when someone posted it to Twitter.

In a follow-up interview with Slate, the CEO-mom herself (answering questions under the condition of anonymity; both reasonable and wise) sought to clarify what, exactly, was going on here. "I’m sure you’ve read the 'I Need A Wife' article that was in Ms. Magazine in 1971,” she said. “It’s 39 years later, and as a working woman, I need a wife.”

More so now, perhaps, than I might have in 1971, when Judy Syfer wrote in her manifesto, "I want a wife who will work and send me to school. And while I am going to school I want a wife to take care of my children." The progress that has been gained since feminism's second wave is that women and mothers are now more enabled to work while raising young children... and yet somehow still responsible for more than 50% of childrearing responsibilities. At the risk of stating the obvious, EVERYONE SHOULD HAVE A WIFE. Someone to support them, their home, their children, their career. Also, you know, dinner on the table as soon as I walk through the door wouldn’t be bad… and maybe, I’m spitballing here, every Saturday morning we get French toast? A thought: do with it what you will. I am willing to bet that if you have children, and work in any capacity (whether raising said children or being paid for your services outside the home or both), you have thought, at some point, two adults is simply not enough to keep this operation afloat.

No matter how many parents are already around, what family could not use an extra pair of adult hands around the house?

How do we get wives, you ask? There are some options. If you, like CEO Mom, are in a position to hire a wife: that’s an excellent choice. Per Slate, CEO Mom will be providing her Wife with $35-$40 an hour (about $75,000 a year) plus benefits, housing, a car, and working vacations. But if, like most of us, you’re at least one seven-digit salary away from outsourcing wifely duties, you still have some options.

You can invite a wife into your existing existing situation — either your partnership, marriage, or self-partnership. I don’t know who would be into that but, like, if you can swing it there’s the dream right there. Because no matter how many parents are already around, what family could not use an extra pair of adult hands around the house? Of course, this is probably a long shot, but dream big, darling.

The third option is probably the most realistic, even if it will take more time to bring about: every partner in a relationship must be “a wife,” someone who is able and willing to take full responsibility for themselves, their homes, and their children. Under new terms, a wife may be any gender, so, you know, if you like your husband no need to swap him for another model. When you have two (or more) folks giving 100% to everything, then neither has to. And no one should. This is the only way forward. Because this current system? It isn’t working. Or, rather, it isn’t and has never worked for wives and mothers. We’re not asking anyone to do anything we haven’t and aren’t. We’re just asking for someone to lighten the enormous load that’s been de facto foisted on us women since as far back as we can remember. The only people we’ve seen do that, so far, are wives. So we need all partners everywhere to wife up. Because, as Syfer put it, my God, who wouldn’t want a wife?

And look, there are some issues with this particular evocation of Judy Syfer’s manifesto. For one, it was originally written as an indictment against the idea that a woman should subsume her own needs in order to provide for the physical, emotional, sexual, and overall well-being of another person, not an actual promotion of the idea. For another, it seems that the poster, CEO Mom, already has a staff of four wives — a housekeeper, au pair, gardener, and property manager are already on staff.

But perhaps less galling than the detailed laundry list of demanding and strange requirements in CEO Mom’s listing (“Correctly quantify how much fish to purchase for five people”) is the idea that, every day, we expect women to do this on top of our other jobs without the generous compensation offered by CEO Mom. Invisible labor is only invisible if it’s not expected of you. For most of us, it’s visible, very real, and running us ragged. So the idea that a mom, busy with work and two kids, would be in need of the kind of help and care that wives have traditionally provided, certainly resonates.