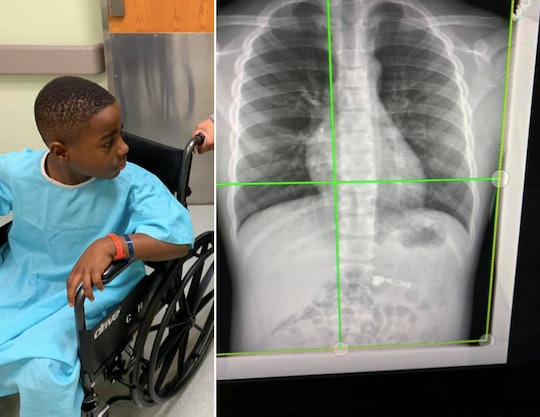 Atlanta, Georgia mom Kiara Stroud wanted to give her 7-year-old son something special this Christmas, like a new pair of AirPods. While her son probably appreciated her gift, it seems he wasn't quite ready for the popular high end gadget. In a recent Facebook post, Stroud shared that her 7-year-old swallowed one of his new AirPods, which led to a trip to the hospital, and tells Romper she is sharing her story as a cautionary tale for fellow parents.

Stroud explained on Facebook that she received a call at work on Saturday notifying her that her son was at the emergency room at Children's Healthcare of Atlanta. Her 7-year-old had swallowed one of the AirPod wireless earphones he had just received for Christmas and began choking while in the care of his grandmother, who rushed him to the hospital. An X-Ray showed the AirPod lodged in his stomach, a photo of which Stroud shared on Facebook.

"I can’t make this up," she captioned the photo. "My child, my child. No more AirPods for this kid."

Stroud tells Romper that she sometimes forgets her son is so young simply because of his level of maturity. "I know as a single mom, I raise my son to be very self sufficient and expect a lot from him at such a young age," she says. "When this happened I had to realize that although he is 7 and above average height for his age, that he is still only a baby."

While some people were apparently questioning Stroud for buying her young son AirPods, as she tells Romper, it should be noted that a man in Taiwan also swallowed his AirPods accidentally in May, according to Fox News. (And they apparently still worked after passing through his system...)

While Romper has reached to Apple for comment, a quick search on the AirPod's product page does not note a recommended age range.

Stroud shared a further update about her own son, explaining that the doctor told her that he would have to "pass" his AirPod naturally, but otherwise would be fine, according to WSBTV-2 in Atlanta. Stroud tells Romper that she is sharing her story in an effort to "raise caution and awareness in other moms" and is simply thankful "this ended up being something we can tell him about when he’s older and not a tragedy."

Every parent needs to make their own decisions about whether or not their kids are old enough for AirPods or other tech gadgets, of course. But it's not the worst idea in the world to take in Stroud's cautionary tale, especially if it saves a trip to the emergency room.