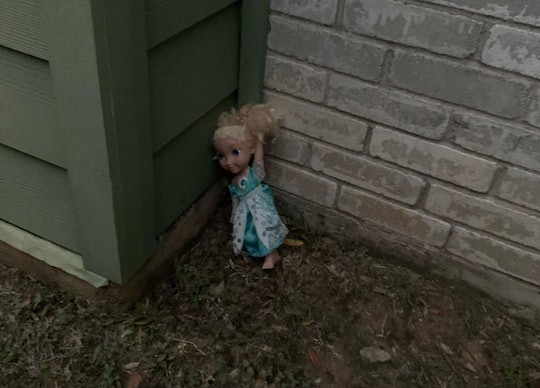 There is only one thing scarier than a haunted child and this is obviously a haunted doll. Any kind of haunted doll, of course, but perhaps a blonde-themed doll in particular. Or so I have come to believe since reading this mom's tale of a haunted Elsa doll from Frozen that kept coming back every time she threw it away. Also, please let me tell you it somehow learned Spanish along the way, so you can have nightmares tonight of sentient dolls who are too attached to your family.

Emily Madonia from Houston, Texas recently posted a harrowing tale on Facebook of the "haunted" Elsa doll that has captured the attention of social media for good reason. Her story has all of the elements a person could want in a real-life haunting: it's terrifying, kind of funny, unbelievable and yet 100% believable.

Madonia explained to NBC affiliate KPRC that she initially bought an Elsa doll in 2013 for her daughter and not much happened for a few years. The doll sang "Let It Go" all the time, but then in 2015 it changed to singing in Spanish. "In 2015, it started doing it, alternating between Spanish and English," she told the news outlet. "There wasn't a button that changed these, it was just random."

Even more frightening, the family never changed the doll's batteries in six years but that did not stop her from singing or speaking whenever it pleased. So her husband tried to throw the doll out — and this is when their troubles started for real.

As Madonia wrote in her viral Facebook post, the family needed help. Her husband threw the doll away in December, but it ended up resurfacing weeks later inside a wooden bench. They tried again, wrapping the doll inside of several garbage bags and putting it out to the curb to be collected for garbage day.

"Great, right? We went out of town, forgot about it. Today Aurélia says 'Mom, I saw the Elsa doll again in the backyard.' <chills> HELP US GET RID OF THIS HAUNTED DOLL," she wrote on Facebook.

Naturally, helpful social media users took to Madonia's Facebook to offer suggestions for getting rid of the doll, such as "only way is to burn it" and "pray to Jesus and burn that doll to a crisp in Jesus' name." Madonia instead decided to ship the doll 1,500 miles to a friend who had actually asked for her (brave soul indeed), hoping to finally rid their family of their haunted Elsa forever.

On Tuesday, Maledonia shared some updates on the haunted Elsa doll, answering questions from curious social media users who can't seem to get enough of this doll saga. She explained that she mailed the doll instead of burning it as people suggested because "it does no good. If there is something in the doll, it will come out. You can’t destroy what’s inside. Honestly I don’t know if any of this junk is true." Also the doll was sent with no return address to her friend's home since he doesn't know her address and I gather she doesn't want the doll to find its way back to her.

Unsurprisingly, Maledonia hopes the doll will stay fully gone this time, but admitted she is getting "a little paranoid" it will return after two weeks as it has in the past. I guess we'll all just have to wait to see if she returns. Maybe this time she'll have picked up a third language, who knows?