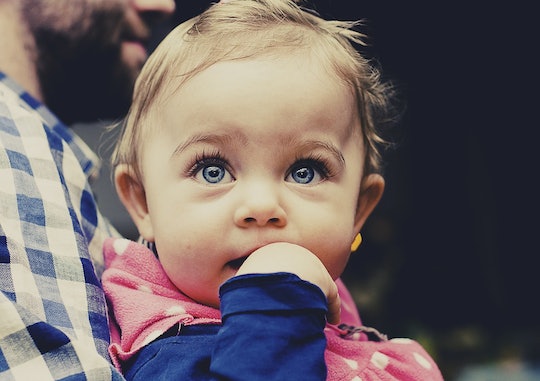 One of the best things about parenting is when another parent figures out parenting and you don't have to. These are, of course, called "parenting hacks." And they are absolutely the greatest. Especially this mom's teething hack, which is so elegant in its simplicity you're probably going to wonder how it's possible you didn't figure it out first. But it doesn't matter now, guys, because the hack has been had, and now you can survive the months of teething you might have coming your way.

Teething has a reputation of turning babies into notoriously unhappy human beings. Their gums are sore and swollen, their jaws hurt, and they really don't have any way to express their frustration other than crying. Like, a whole lot of crying. All day, every day. Parents tend to get pretty desperate during the teething months, and are generally willing to do just about anything to soothe their baby's pain. Enter Ohio mom Tasia Blackwell. She came across a brilliant way to deal with her infant's son teething... a "milksicle." Blackwell shared a video on Facebook of her son enjoying a nice, cool milksicle, made with Blackwell's pumped breast milk. As she wrote in the caption, "LOVES it! Helps with his teething pain and helps fill up his tummy!"

Parents clearly agree it's a great idea; The video has been viewed over 20 million times since she initially shared it at the beginning of June.

The concept of a "milksicle" has actually been around for awhile. The website Busy Mommy Media shared the "momsicle" back in 2015, as a way to comply with the American Academy of Pediatrics recommendation that babies under six months old avoid solid foods. The momsicle was invented as a perfect fix to keep babies from developing potential food allergies, and also as an alternative to store bought popsicles that contain sugar and are too long and narrow for babies.

Apparently it took Blackwell's video on Facebook to really bring the idea of a breast milk popsicle mainstream. She was even kind enough to share an image of her breast milk popsicles stored in freezer bags as an extra tip. These are a great way to help soothe babies' sore gums and also make sure they are getting enough nutrition; it's not uncommon for a cranky, teething baby to refuse to be nursed and go on "nursing strikes" simply because their gums are too sore.

For parents concerned about whether their baby can safely enjoy one of these milksicles, it's important to note that any form of popsicle is not recommended for babies under six months old. Also they shouldn't be left along with a milksicle (or popsicle) because there could be a choking hazard.

As far as parenting hacks go, this one might be one of my favorites. Because nothing deadens a parent's ability to problem-solve worse than a crying baby in pain.

More Like This
Does The FDA's Plan To Limit Lead In Baby Food Go Far Enough?
14 Recipes For Sick Kids When Everyone's Tired Of Canned Soup & Crackers
Covid Vaccine “Deserts” For Kids Under 5 Make It Almost Impossible For Parents To Find Shots
What Foods Fight Nausea During Pregnancy?
What Parents Are Talking About — Delivered Straight To Your Inbox