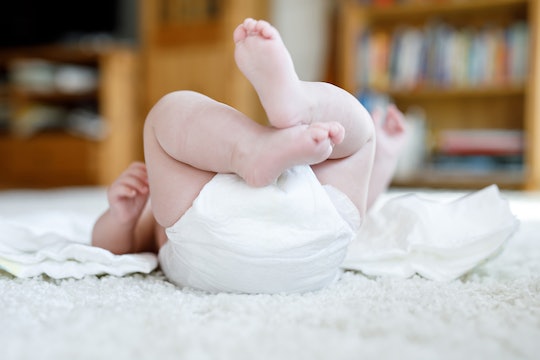 Being a mom of a few young kids is often stressful in the best of circumstances, but poverty and the oftentimes associated lack of resources can exacerbate the mental toll it can take in a major way. And while the government has programs in place to help families who may experience food insecurity, for example, safety nets to ensure they have enough diapers for little ones are much harder to come by. So, perhaps it's not so much a surprise that moms who struggle to afford diapers are more likely to suffer from depression, as a new study has found. After all, diapers are a crucial need among so many American families, and they can be seriously expensive.

To come to this conclusion, researchers from the Yale School of Medicine asked low-income mothers about their ability to purchase diapers as well as whether they experienced food shortages, and evaluated their depressive symptoms, according to the Yale Daily News. In the resulting study, which was recently published in the journal Health Equity, they reported that the moms who said they needed diapers also scored higher on the Center for Epidemiologic Studies Depression questionnaire. Strikingly, this was not the case for the moms who shared that food insufficiency was, in fact, a very real part of their lives.

Study co-author Anna Austin told the Yale Daily News that disposable diapers can cost between $70 and $80 per week per child, which shakes out to between $840 and $960 annually. That's a lot, especially considering the fact that government anti-poverty programs such as Medicaid, the Supplemental Nutrition Assistance Program (SNAP), or the Special Supplemental Nutrition Program for Women, Infants, and Children (WIC) often exclude diaper coverage completely. In fact, the only national initiative to help low-income families get diapers is the National Diaper Bank Network (NDBN). NDBN — a nationwide nonprofit organization dedicated to raising awareness of diaper need — supports more than 300 community-based diaper banks nationwide.

The network is helping to meet a crucial need, as a 2017 survey it conducted along with Huggies found that a full one-third of American families don't have the funds to consistently purchase enough diapers to keep their babies clean, dry, and healthy. And that's bad news for both the babies and their parents. Another co-author of the Yale study, Megan Smith, told CBS News that this can leave parents with little choice but to reuse diapers or to leave their kids in dirty ones. This can cause urinary tract infections and diaper rash, Smith told the news outlet.

Naturally, this comes with a price for parents, too, as Smith told CBS News:

When parents are feeling increased stress because of needing to leave children longer in dirty diapers, that impacts the parents' ability to bond with their child. We know how important that is because when children don't have secure attachments early in life that actually impacts how their brains develop, how they learn and how they form social relationships, so the impact diaper need can have on that attachment has really lifelong consequences.

To know that such a high proportion of families in the United States are struggling to afford such a basic staple of baby-rearing is heartbreaking. Luckily, anyone who wants to make a difference for those families can raise money for the National Diaper Bank Network by donating either one time or setting up a recurring contribution, encouraging others to give at their own events such as baby showers and toddlers' birthday parties, or even starting a fundraising campaign of their own.

For many Americans, helping out is an easy thing to do, and it could make all the difference in the world for babies — and their parents who are often struggling in silence.

Correction: A previous version of this article identified the NDBN as a federal initiative created under President Barack Obama's administration, which is incorrect. The article has been updated with the correct information. Romper regrets the error.

More Like This
Is There Parenting Advice To Take From ‘Strangers To Ourselves’?
This Is What It’s Like To Parent With OCD Right Now
Exclusive: Watch Hayden Panettiere Talk About Addiction Treatment 4 Months Postpartum
What Parents Need To Know After DEA Issues Warning About "Rainbow Fentanyl"