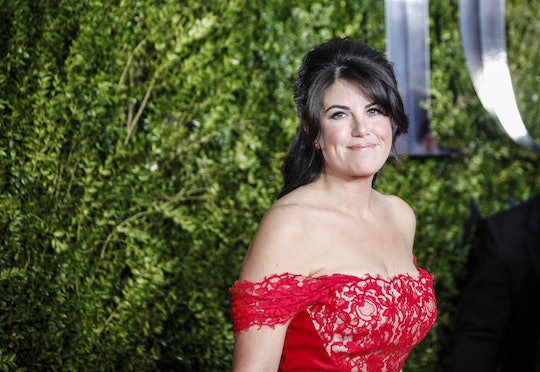 On Friday morning, almost everyone seemed tuned into the inauguration ceremony to express all of their feels about The Big Day. On Twitter, commenters quickly began to mock President Trump's 10-year-old son Barron, who did, by many accounts seem humorously bored with the whole thing. (And what 10-year-old wouldn't be?) But the comments got nasty and given the divisive nature of the new president, some people channeled their distaste for the new administration into hate for a 10-year-old kid. Which is not cool. No stranger to bullying, on Tuesday, Monica Lewinsky defended Barron Trump and also denounced the cyberbullies who turned on Saturday Night Live writer Katie Rich who was suspended for tweeting a troubling joke herself. "Barron will be this country's first homeschool shooter," Rich wrote, before backtracking.

Rich's tweet was deleted and she has since apologized. But the outpouring of support for the youngest Trump came to a head when Lewinsky, who knows her way around bullies, tweeted, "All children need to be protected from bullying + mockery. (incl. Barron Trump)." She also stood up for Rich, who was attacked on Twitter for her inappropriate comment. "Online mobs are not the answer either. @katiemaryrich has apologized. comedy is an imperfect science. (trust me!)," Lewinsky wrote.

Lewinsky knows all about being publicly shamed, bullied, and how the words of others can affect people's lives. The fact that she stood up for both Barron and Rich shows that she gets how bullying — from any side — hurts people. Rich's comment, for instance, wasn't just about making fun of a 10-year-old who was thrown into the spotlight, it also played into the bullying "system" as well. She joked that Barron "looked like" a school shooter. Let us never forget that horrific school shootings are often two-fold and perpetrated by kids who are bullied, made to feel like outcasts, and don't receive proper counseling.

Shaming Barron — a child — is not the way to express your opposition to his father's politics. Lewinsky was quick to point out that if people were bullying Malia or Sasha Obama, some of Barron's bullies would undoubtedly be outraged. That people disparaged the Obama family is not an excuse to mock the Trump family, of course, but does bring up an important point — that two wrongs never make a right.

In response to the bullying of Barron, the White House issued a statement asking people to please, for the love of all that is good, lay off the first son. “It is a longstanding tradition that the children of Presidents are afforded the opportunity to grow up outside of the political spotlight. The White House fully expects this tradition to continue," Press Secretary Sean Spencer said in a statement. Former first daughter Chelsea Clinton commented on the matter on her own Twitter too, asking people to leave Barron alone — and if anyone other than Lewinsky "gets it," it's Chelsea, who was also mocked in the public sphere. (She was once called the "White House dog" by Rush Limbaugh and was the punchline to many Saturday Night Live sketches.)

That Saturday Night Live, which has picked on first children before, and will likely continue to parody Trump himself, suspended its writer was a logical and smart move on the network's part. Satire only works when it's well directed, after all.

Think about it: Young children don't decide policy and have absolutely nothing to do with politics. Bullying is unacceptable, even if you believe that Trump himself has bullied people. There are many ways to oppose the incoming administration. Bullying a 10-year-old online — or anyone for that matter, as Lewinsky pointed out — is not just useless, it's absolutely tasteless and should be called out whenever it happens.