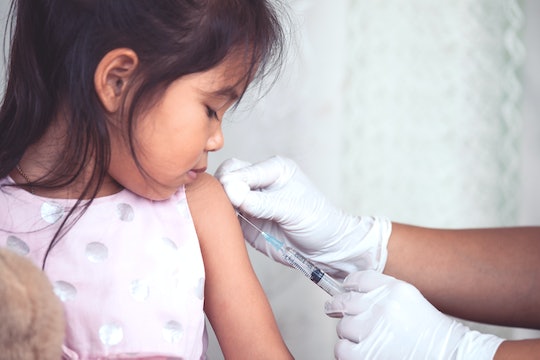 Parents are meant to keep their children safe, it's the number one rule of parenting. But beyond that, all adults are supposed to make sure that children everywhere are safe. No matter what. And yet, a new study says that more people are asking for vaccine exemptions for non-medical reasons than ever before. Which will needlessly put children at risk.

There are currently 18 states that allow parents to opt out of vaccinating their children for non-medical reasons. Parents who live in these states can choose not to inoculate their children from preventable diseases because of their own personal beliefs. And it seems that some of these states are seeing a serious rise in parents asking for non-medical vaccine exemptions. According to a recent article in PLOS Medicine, 12 of these 18 states have seen a surge in children missing out on important vaccinations in kindergarten since 2009; Arkansas, Arizona, Idaho, Maine, Minnesota, Missouri, North Dakota, Ohio, Oklahoma, Oregon, Texas, and Utah.

A team of researchers from the National School of Tropical Medicine at Baylor College of Medicine and the Texas Children's Hospital Center for Vaccine noted that states who reported a higher rate of non-medical exemption from vaccination also experienced a lower rate of coverage for measles, mumps, and rubella (MMR) vaccinations, according to Science Daily.

So here's why this is a problem; every community needs to ensure they reach the optimum "herd immunity" to protect people who have not developed immunity, like tiny infants, as noted by Vaccines Today:

It arises when a high percentage of the population is protected through vaccination against a virus or bacteria, making it difficult for a disease to spread because there are so few susceptible people left to infect.

The level of vaccinated people needed to protect those without immunity varies from disease to disease, but in the case of a highly infections disease like measles, 90-95 percent vaccination coverage is ideal, according to researchers. Having a solid herd immunity can prevent a measles outbreak, like the 2015 outbreak that happened in California. At least 159 people contracted measles while visiting Disneyland in Anaheim, California, in December 2014, and The New York Times reported that the outbreak was aided by California's low vaccination rates.

Despite the recent measles outbreak, MMR vaccination numbers have been declining in two-thirds of the non-medical vaccine exempt states for the past nine years. To the point where "hot spots" have developed in some rural communities and cities because the vaccine exemption rates are too high to protect non-immune people from preventable diseases like measles. Cities like Detroit, Houston, Kansas City, Phoenix, Pittsburgh, Portland, Salt Lake City, and Seattle are all hot spots, according to The Washington Post. Study co-author Dr. Peter Hotez of Baylor College told the news outlet that these hot spots “suggest that outbreaks of vaccine-preventable diseases could either originate from or spread rapidly throughout these populations of unimmunized, unprotected children.”

The measles virus is a "highly contagious virus and spreads through the air through coughing and sneezing," according to the Centers for Disease Control and Prevention. It can be serious, or even fatal in some cases, if pneumonia or encephalitis, an inflammation of the brain, develops. So why are parents refusing to vaccinate their children from a preventable disease? Because of outdated research from 1998 that has overwhelmingly debunked linking vaccines to autism. Despite the fact that the doctor behind the research, British doctor Andrew Wakefield, was found to have falsified data for a study that linked autism to vaccines, many parents continue to believe it. In fact, the National Institute of Health looked at responses from parents who claimed a non-medical vaccine exemption for their reasons, and the overwhelming majority questioned the safety of vaccines.

This is incredibly dangerous, not just for the children of those parents but all of the non-immune children they might come into contact with. Immunization has saved millions of lives, and is considered one of the most significant medical advances of modern times.

Why would parents deny their children these health benefits based on faulty research?