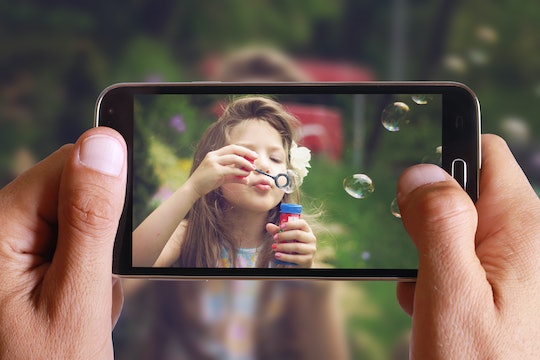 Study: Many Parents Are Cautious Of Posting Their Kids' Photos Online, But Do It Anyway

In the age of social media, parenting has its own set of unique challenges and parents of young kids nowadays are faced with much different decisions regarding safety than prior generations were. And when it comes to posting photos online, parents seem to be torn on what exactly to do. In fact, a new study has found that while most parents admit they are cautious of sharing their kids' photos on social media, many will still post them anyway.

There's a lot to be concerned about in today's world, from such freak-out thoughts as strangers tracking down your children to more general principals such as a young person's rights when it comes to privacy, and just how much is fair. But these worries, and others, typically don't keep a super proud mom or dad (been there!) from going ahead and clicking "share," according to a study by cybersecurity firm McAfee, as NBC News' central Indiana affiliate WTHR reported.

According to the new findings, 71 percent of parents surveyed agreed that photos posted online could "end up in the wrong hands." Additionally, almost one-third of the same parents (30 percent) said, according to the study, that they post a photo or video of their child on social media at least once a day. Meanwhile, as the study found, 12 percent reported that they posted four or more times a day.

All this "sharing" and "liking" raises concerns about whether we, as a society, are giving away too much personal information to the internet about our most precious assets — our family.

“Posting photos and videos on social media is a great way for parents to share what’s going on in their lives with loved ones,” Gary Davis, chief consumer security evangelist at McAfee, said in a news release, adding:

However, the survey reveals parents are not giving enough consideration to what they post online and how it could harm their children. If shared images get into the wrong hands, they can be used to gather information like birth dates, home address, school, or even the child’s full name which could lead to cyberbullying or even identity theft.

In fact, according to the study, 58 percent of parents said "it's their right" to put up pictures of their children, while half of the parents said they have or would put a photo of their kid in a school uniform online.

While other recent studies have found that first-time parents, who are generally Millennials, see the future being so digitally-based they even thought about their chosen baby name according to whether the domain was available, not everybody is that into social media. Numerous articles have run, such as one in The Guardian, about the community complications of posting kids photos, including the etiquette problem of posting video from your little one's school play, only to realize you didn't ask their classmate's mom or dad for permission.

Celebrities have been vocal about their decisions to keep their kids off social media. For example, Jennifer Garner does not feature her children in photos on social media, due to a belief that they did not choose the spotlight, as E! News reported. And other celebs, such as Kristen Bell, never features her kids' faces online, as HuffPost reported.

Additionally, Ashton Kutcher and Mila Kunis removed most traces of kids on their social media accounts after feeling that social media "took an ugly turn," as Kunis explained to Cosmopolitan.

And while this recent study found 70 percent of parents only post kid photos on private accounts, there clearly has to more conversation around this important topic. "Everything posted on a social network should be treated as if it's public," McAfee warned in the findings, as noted in the press release.

According to Common Sense Media, posting any pictures of a minor will result in that kid having a "digital footprint," an electronic paper trail of his or her existence. While that might not sound terrible, it also means that advertisers know your kid's stats — and what products and services to market to them. As Common Sense Media recommended, one remedy could be turning off your phone's GPS to minimize location information.

If, as parents, we commit to being more clear in letting others know our posting standards, and inquiring about theirs, less conflict will ensue. Also, as kids get older, it's important to consider actually asking their permission regarding what they want out there. For instance, my 6-year-old recently said that she didn't want an image of her online because she was in her pajamas. That was a fair request; I'm glad I asked.

More Like This
10 Parenting Lessons From Abbott Elementary That You'll Want To Write Down
Here’s Your Guide To Paced Bottle Feeding
Baby-Led Weaning: A Comprehensive Guide To Introducing Solids
Tips For Apple Picking With Kids