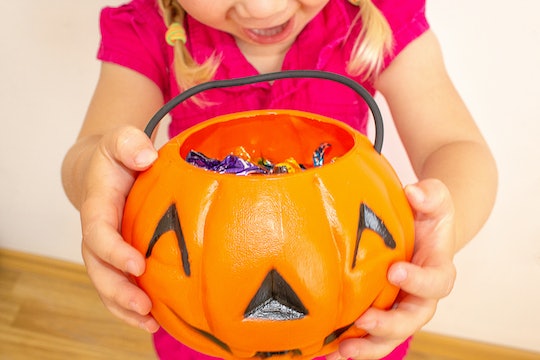 Good News! Most Parents Steal Halloween Candy From Their Kids, Just Like You & Me

Now that my kids are grown, I have to buy Halloween candy for myself and do you know what? It's just not the same. I miss the days of sneaking a fun size Twix out of my son's Halloween bag instead of just buying myself as many full size Twix as I could ever want. Where's the fun in that? I'm sorry to tell you this but stolen Halloween candy tastes infinitely better than anything I've purchased for myself. And I'm not alone. It turns out most parents steal their kids' Halloween candy stash, because trick-or-treating is a lot of work and we need a reward after putting the kids to bed. It's not like we're going to watch scary movies without treats, right?

A new survey conducted by TopCashBack.com asked 3,099 adults a whole bunch of questions on the topic of Halloween, as NBC News affiliate WTHR reported. The company asked questions about things like Halloween costumes; it turns out a full 48% of us are wearing the same costume again to save a little money, while 33% just loved that costume so darn much they don't want to get a new one. And some of us might dress as a combination of sooth-sayer/lady pirate every year simply because we have a combination of clothes ready to use at the back of the closet.

But where do we all stand when it comes to our kids' Halloween candy, you ask? Apparently we stand in solidarity on the subject of stealing from children. According to the survey, as Fox 8 reported, 78% of us are perfectly comfortable stealing our kids' Halloween candy. And as if that's not enough, 28% of parents who were surveyed admitted that they ate more candy than their kids at Halloween.

To that end, according to WSET, 71% of parents buy more candy than they need for trick-or-treaters, perhaps in an emergency situation like getting caught in the act or your kid hiding their stash. Desperate times call for desperate measures.

The real question, in my opinion, is which candy is being stolen the most here? What is the most popular? For instance, in the past I've tried to be careful about taking too much of their chocolate and will change it up for a snack-sized bag of Doritos to throw them off my scent. It's all about balance, after all. If you're wondering which items in your child's Halloween bag are so popular that you might want to steer clear, a survey by Monmouth University found that Reese Peanut Butter Cups are the most popular candy in the country, according to CNN. So maybe just take one or two and then shift the candy around in your kid's bag so they won't notice.

So why do we steal our kids' Halloween candy? Maybe we are worried they will get cavities and so, in the ultimate feat of self-sacrifice, decide to take the hit for them like a true martyr. Or maybe we just don't want to admit how much we miss trick-or-treating ourselves so we trick-or-treat from our kids but without the asking or the costumes.

Or maybe it's just that candy is delicious and we don't want our kids to have all the fun. Who knows?