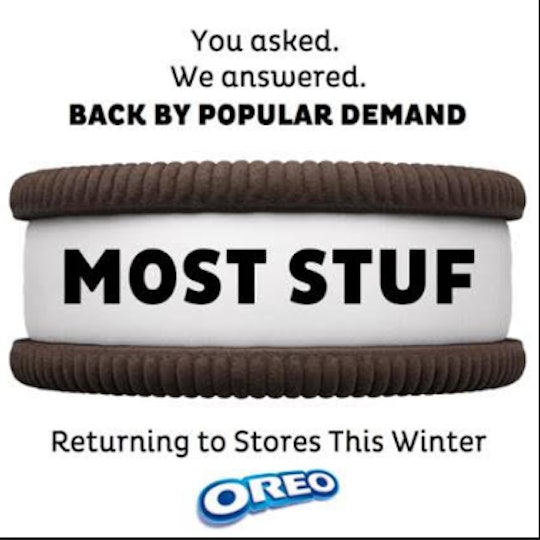 I take my snacking very seriously. Like I'm not one of those people who will just aimlessly grab some health cookie (if such a thing exists) and eat it and move on with my day. I think about my next snack while I'm eating the one in my hand, this is the truest thing I can tell you about adulthood. All the time you're thinking about food but mostly snacks. So when I found out that Most Stuf Oreos are coming back I just wasn't sure how to feel. I might be worried that it's too much of a good thing, you know?

Not that I have anything against Oreos. On the contrary, I have been a fan since I can remember. And sure, I will admit to you now that, much like other Oreo fans, I sometimes found the cookie-to-middle ratio of a classic Oreo to fall slightly short of the mark. I am a pull apart person, you should know this about me, so I like to have exactly the same amount of white creamy middle on each piece of the chocolate sandwich part, I'm sorry I insist on this. So the idea of just a massive amount of stuff inside the Oreo definitely appeals to me. And with Most Stuf Oreos coming back to supermarket shelves this winter, as the company confirmed with Romper, I guess I'm going to have to make some serious snack decisions.

But is this amount too much? So far Twitter is divided.

So here's how it works with Most Stuf Oreos, the cookie with (as you might have guessed) the most creme inside them. Think about eating a Double Stuf Oreo and then think about eating a Mega Stuf Oreo and now try to imagine even more creme filling than either one of those monster cookies... this is the Most Stuf. They were initially launched in January and then taken back off the shelves, much to the dismay of fans who seem to need a seriously imbalanced creme to cookie ratio. Now it looks like they'll be coming back for winter 2019, as was first hinted at the National Association of Convenience Stores Expo in Atlanta, Georgia. Cookie fans were pretty excited and junk food Instagram influencers, already basking in the knowledge that they have the best job on the planet, shared the exciting news on social media.

As excited as some fans were, others were feeling overwhelmed just looking at all that creme filling. As some Instagram users posted on The Junk Food Aisle:

Side note: this might be the best idea I've ever read.

I don't know about you but I will definitely give these Most Stuf Oreos a try. And do you know what else I'll do just in the name of snack science? I'll go ahead and wedge an extra cookie in the middle to see if it's a better ratio.

The things I do for my job.