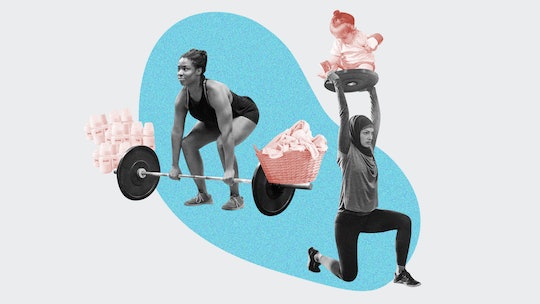 Are You Really Trying To Make It Through A Pandemic Without Asking For Help?

"It's not a competition" is something we hear as soon as we’re old enough to fight with our siblings over who gets the last lick of the brownie whisk. But if motherhood — the journey that I once believed to be the great equalizer — has taught me anything, it's that keeping score feels really, really good. I’m convinced my herniated disc and white hot sciatica pain are the result of carrying the gargantuan weight of motherhood around unassisted, because as long as I outlast someone else, I have won. This is the Pain Olympics, and the louder you scream and the more irritated you are trying to handle things yourself, the more medals you win. Then, when the game is over and everyone's sore and exhausted (but you're the SOREST and the MOST exhausted), you realize maybe it's really not a competition. (But it is.)

I might have wondered what I was training for, stumbling over the finish line each night like one of those figure skaters collapsing to their knees, someone throwing a giant coat over their sparkly leotard as they sob, and now I know: a pandemic that pushes each of us to our absolute limits. A silent athletic attack in a game only I am privy to is seeing me through the long afternoon hours straight into bedtime.

I’ll set the scene. In my house, there are two parents home with two children 5 and under. Both parents are attempting to carry out full-time jobs from their laptop due to shelter-in-place orders. One child needs constant supervision or she will destroy the house from the inside out. The other one has digital kindergarten lessons and a Zoom storytime to make, and we also need to keep her brain from rotting into mush with her tablet. My husband, however, “can’t concentrate with all this noise.” This is what he says from his spot in the dining room, as I work on the floor of the playroom while the children run laps around me. Of course this makes me angry and irritated and upset — but I can’t say anything. You don’t win gold medals in the Pain Olympics by asking your husband for help or trying to set a schedule so everyone’s happy. You win by huffing up the stairs with the screaming baby under one arm and your Zoom meeting in the other to change a poopy diaper because you can’t wait for him to do it. You’ll be interviewed by Scott van Pelt on SportsCenter about your win later.

“When one loves, one does not calculate," says author, podcast host, and happiness researcher (The New York Times called her the “queen of the self-help memoir”) Gretchen Rubin in a post about keeping score in marriage for The Happiness Project. And you already know what she is talking about, or you wouldn’t still be reading.

In one specific example, she writes about her husband letting her sleep in while he wrangled their two daughters, so later when he wants to go the gym, she doesn't balk. Now they're even. Until later that same day when she realizes she's been parenting her two children alone for quite some time and finds her husband taking a nap on the bed. She candidly writes about her anger, her fury, and how her incessant need to keep score was deeply affecting her happiness (and possibly her relationship).

And reading it, I felt seen.

Now I'm winning. But the trick is, when you're topping the ranks in the Pain Olympics, you're on an empty podium.

It's not that I want to keep score. It's not that I want to put my scant energy into reminding my husband and my family and my children how hard I work every day to keep everyone happy and healthy. It's that I can't help myself. In the game of oneupmanship, I have no boundaries or filter. I am a professional, trained to maximize my passive-aggressiveness, and turn my frustration and expectations into javelins I can launch at anyone who dares suggest they are having a tougher time than me at the moment.

There’s a reason there are so many of us competing in this same exhausting game. "Women want to hear empathy from their partners so they feel like their partner has their back and understands that life can be difficult for them as a woman," Katie Leikam, a mental health therapist, tells Romper. "When a woman does not get this concern and empathy, it does become a sort of mental gymnastics with the woman trying to be heard and understood. That's the heart of this Pain Olympics."

You see, now I'm winning. But the trick is, when you're topping the ranks in the Pain Olympics, you're on an empty podium. There is no one below you. You're the only one playing, and the game becomes harder to manage the more competitors you pull in with you. Reading a friend's Facebook post about how she made cookies with her kids and played with them in the sprinkler and managed to get them all to bed at 7 p.m. so she could watch Tiger King can fill me with an ugly competitiveness rage. "Well yeah, she doesn't have to work, does she? Of course social distancing is going well for her."

But I'm not seeing that her husband works at a grocery store, and she has to keep herself and her kids busy so they don't lose their minds, and she has to put them to bed at 7 p.m. so when her husband comes home, he can sanitize himself thoroughly without two children trying to hug him and kiss him. And she’s not hiding this part of her life for an influencer-perfect Instagram grid, either. There are strong psychological reasons that mothers don’t ask for help — if our mothers could do it all, why can’t we? — and sometimes that innate, biological stubbornness looks easy to everyone else.

"Comparing oneself to other women and moms is also a way for women to validate themselves. If they perceive that they are doing more than another mom, they can view this as an achievement in a way," therapist Sally Baker says. "It’s an acknowledgement that they’ve been carrying a significantly heavier load than, say, the woman down the street who has round-the-clock help."

Reader, there are few things more dangerous than letting your ego take over this game. Truly. But there’s something to be said for the strength the game gives you, too. Motherhood is overwhelming, and if you don’t get up and push through the exhaustion and the spilled Cheerios and the unwashed hair, you don’t get the perfect moments of a movie night with homemade cookies. Feeling competitive is sometimes an act of survival — if my neighbor can take care of four kids, then I can make it through a Zoom meeting with my toddler without losing my sh*t — and that is the motivation that you need. “B*tches get sh*t done,” Amy Poehler and Tina Fey famously said on Weekend Update. And those b*tches are winning.

Feeling competitive is sometimes an act of survival — if my neighbor can take care of four kids, then I can make it through a Zoom meeting with my toddler without losing my sh*t.

But a healthy dose of competition can turn sour (you got the gold and now feel like total sh*t, hooray!), so it’s just as much of a win when you convince yourself you don’t have to play anymore. Rubin suggests changing your perspective, and looking at the things you do — things you expect acknowledgement for — as the things you do for yourself. You washed the dishes, and now you have a clean sink. You let your kid have two hours of screen time, and now you got the laundry done. You did all the grocery ordering, and now you don't have to worry about it anymore. And in the middle of a pandemic, your children are alive and well and still wiping their own butts.

This current moment in time, when the Pain Olympics have replaced the actual Olympics for mothers all over the world, has allowed us to see the inside of a stadium we've not fully imagined before: I’m really here, you think, marching around carrying a ginormous flag, your bottom hand shaking to steady the base at the same time as your insides wilt and your ankles buckle. We’re all here turning into dust together. We’re so proud! Look at us!

And when you find yourself comparing... well. The trick for me is to remind myself that I have no idea what lies behind someone else's door. A friend could see my Instagram posts of my children playing in the backyard and think that my responsibilities are so lax, I can sit in the grass for hours without a care in the world. What they don't see is me wedged into the plastic slide, typing furiously into my overheated laptop, while shooting angry eyes at my husband who's inside working in silence. I'll give myself the bronze medal for that one.

Sally Baker, Ph.D., clinical psychologist, author of Mom Brain: Proven Strategies to Fight the Anxiety, Guilt, and Overwhelming Emotions of Motherhood--and Relax into Your New Self.