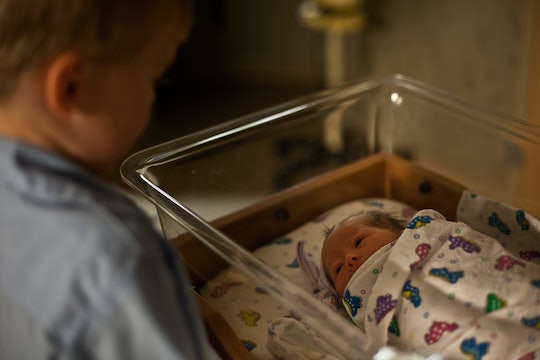 As anyone who has ever struggled with mental illness knows, finding help — or even feeling like it's OK to ask for help in the first place — can be incredibly difficult. And, when you're pregnant or newly-postpartum and finding yourself blindsided by depression (isn't motherhood supposed to be a happy time?), speaking up about it can feel pretty terrifying. But what far too many women are finding is that speaking up might not even be the most difficult part. Although awareness and support for postpartum depression are growing (that's the good news), according to the New York Times, the sad reality is that mothers with postpartum depression pay more for insurance, companies are charging them more for life or disability insurance, some are excluding mental illness coverage from their policies, or companies are just denying mothers with PPD coverage entirely. Ugh.

More Like This
5 Signs Your Baby Is Too Cold
Your Guide To Swimming Postpartum
The FDA Has Authorized The Pfizer Vaccine For Kids As Young As 12
Survey: Just 30% Of Parents Would Get Their Kids Vaccinated Against COVID-19 Right Away

The implications of this (perfectly legal, accepted, standard) practice, of course, are huge. Not only does it mean that women who have prioritized their health —and the health and well-being of their children and families — may be unable to obtain insurance that could protect them in the future, but it also means that women who need help have a pretty compelling reason to continue suffering in silence. And it's yet another way that mental health stigma is undermining incredibly important efforts to save the lives of women and children from something that is entirely treatable. Instead of providing support, these actions by insurance companies shame mothers for something that is not their fault.

When the U.S. Preventive Services Task Force recommended earlier this year that doctors should screen pregnant women and new mothers for depression, according to CNN, it marked a major step forward for mental health advocacy. It meant that prenatal and postpartum depression would be something on the radar of more doctors and taken more seriously as a real medical issue, and it also meant that maternal mental health was being discussed publicly in a way that is desperately needed. After all, depression, as CNN noted, "is the top cause of disability among adults in high-income countries," and "increases the risk of death and decreases the quality of life for patients and their family members," alike. But it doesn't just affect mothers: prenatal depression has been linked to complications for the baby, too, like pre-term birth, low birth weight, and developmental delays.

From an underwriting perspective, penalizing conditions like postpartum depression probably makes sense. After all, a woman with a diagnosis of mental illness does indicate higher risk to an insurance company than one who has never experienced a mental health issue in her life. But, of course, having or not having a diagnosis doesn't say much at all about the actual reality of the situation.

A few years ago, before I ever got pregnant, I experienced what my medical file would refer to as a "major depressive episode." In other words, I was depressed — seriously depressed — and I ended up hospitalized in a psychiatric ward as a result. It was unbelievably positive and helpful and life-saving that I ended up there, and since then I've been able to continue receiving medical care that has allowed my mental illness to be managed and controlled. As a result, I don't have have to live with the fear or burden of not being able to function because depression is holding me in its grasp.

But, when it came time to purchase life insurance, I learned, in no uncertain terms, that the act of reaching out — the act of getting the help that I needed instead of pretending everything was fine when it absolutely wasn't — meant that I was basically uninsurable. The fact that I'd been hospitalized in the past and that I was continuing to take medication meant that I'd be paying significantly more than my unmedicated husband was for significantly less insurance. Which meant that if I died from something completely unrelated to my mental health history, I wouldn't have the kind of life insurance that my family would need stay afloat.

That's frustrating, of course, but here's the kicker: if I hadn't been diagnosed, if I hadn't been hospitalized, if I'd refused to take antidepressants and chosen instead to leave my depression untreated, then, in the eyes of my insurance company, I would have represented less of a risk, and I'd be eligible for a cheaper and more comprehensive policy.

When I found this out — after doling out lots of intensely personal, private, painful information about my medical history to a stranger over the phone — I felt incredibly ashamed, like I'd been branded as a crazy person. But most of all, I felt like I'd let my family down. If I'd been different, if I'd been stronger, if I'd been able to "deal with my depression on my own," I wouldn't have inadvertently put them in a position where they'd be forced to struggle if something were to happen to me. I screwed up. I made a mistake.

But the truth, of course, is that it wasn't my fault at all. The truth is that I did exactly the thing I was supposed to do — the thing that doctors will be encouraging their patients to do thanks to the U.S. Preventive Services Task Force recommendations — because I needed help and got it. And I'm continuing to get it, and that is why I'm doing OK. That is why I'm actually pretty low risk, even if I don't seem that way to my insurance company.

As a result of my own mental health crisis, I now volunteer my time on a distress line to help other people who are struggling. And, every now and then, I will speak to mothers who are afraid to ask for help, not because they are worried about themselves, but because they are worried about their children. What will people think of them if they admit that they aren't loving motherhood? And, more importantly, what could the implications be later on if somewhere, in some doctor's file, there is proof that their children have a depressed mom? Could that come back to haunt them?

I tell them that they shouldn't be afraid to get help, that they are doing the right thing. But, as any other woman out there who has struggled to get insurance after a depression diagnosis can attest to, that doesn't mean there might not be consequences (and who knows what they might end up being). Regardless, one thing is for sure: as long as that's the case, there is clearly still a long way to go to fight the stigma surrounding mental illness. And that's not good for anyone.