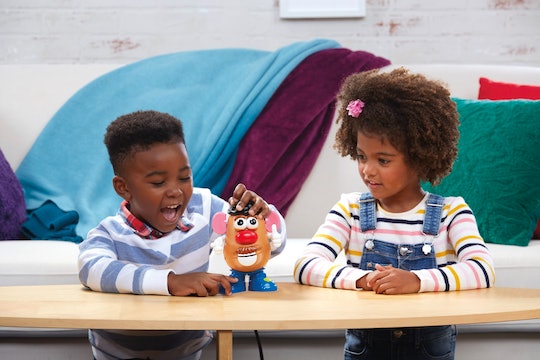 There's a new toy in town based off the classic all-time favorite — Mr. Potato Head. Except this new rendition isn't like the one you and your kids are familiar with. The new version, Mr. Potato Head Movin' Lips, is an electronic interactive talking toy, and it's seriously amazing. It's like all of the Toy Story installments have come to life. Now if this Mr. Potato Head Movin' Lips starts trying to get your kid's dinosaur and piggy bank in on some adventure, you know you've got a real life Pixar event happening in your house.

Mr. Potato Head has come a long way since its earliest days when it was first released in 1952. In fact, almost 70 years later, Mr. Potato Head has worn many faces from Star Wars to Iron Man to rocking fan gear for basically every major sports team. But at this year's Toy Fair in New York City, the classic toy got a serious upgrade. The newest version of the toy was debuted by Hasbro, and the new and improved Mr. Potato Head Movin' Lips will be available in the fall of 2019, just in time for the holiday season. And if you're excited about Toy Story 4 coming out this June (who isn't?), this might be the perfect gift for someone on your list.

This new version of Mr. Potato Head is recommended for children ages 3 and up and retails for $25. But enough of those details — let's hear what this thing does, right? Mr. Potato Head Movin' Lips talks and sings while keeping a lot of the original mix and match features that you've grown to love like arms, eyes, and accessories. Mr. Potato Head Movin' Lips is an interactive toy that's fun and entertaining for both kids and adults. You just pick a mouth to attach and press the buttons to watch his mouth actually move. His lips synch to some of the catchiest songs and funniest phrases, and the toy features more than 40 phrases and four parody songs, including "Lips Are Movin'" by Meghan Trainor, because well — his lips are movin'.