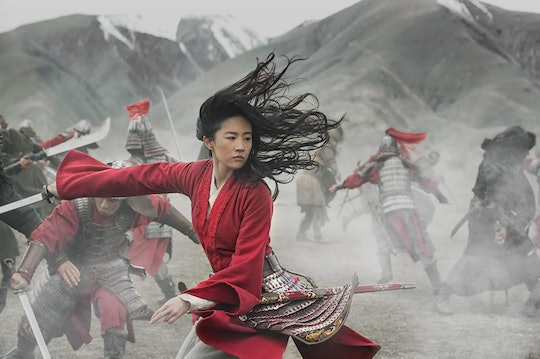 These 'Mulan'-Inspired Halloween Costumes Are Perfect For The Whole Family

Celebrating beloved characters on Halloween is par for the course, but sometimes certain costumes just get played out. Batman and Superman are great, but I truly believe their time is up. Let's get down to business to defeat those tired costumes once and for all with these Mulan Halloween costumes that will bring honor to us all.

The new live-action version of the movie may have been missing some comic relief from Mushu and fun songs to sing along with, but Mulan's classic display of courage and grit in the 2020 live-action film was still a shining example of heroism for kids everywhere. This Halloween, little ones who watch Mulan's daring displays of bravery over and over again with wide-eyed awe can emulate her different looks from throughout the films with these costume selections.

Adults can also get in on the action with costumes from both the live-action and animated versions of Mulan to make celebrating all that the movie stands for a family affair. Whether you choose to re-live all of the '90s nostalgia in a costume from the animated film or don the more current warrior-style gear from the new film, these Mulan costumes are sure to be a hit this Halloween.