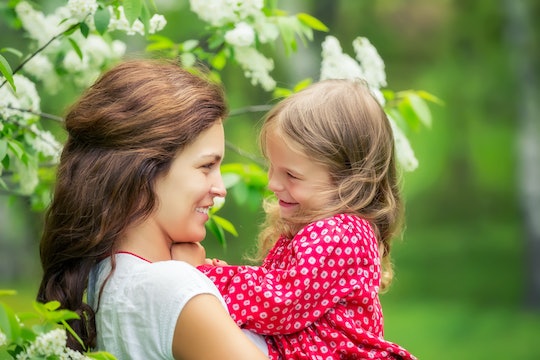 My 4 Year Old Helped Me Understand My Mom's Death

After my mother died, I convinced myself she lived on flower petals. This was convenient, as she passed in April, just in time for the magnolia trees to shed their buttery petals like organic confetti. During nature’s less prolific months, she became the miniature rainbows that showed up on my stairs each sunny day around 4 p.m. For my father, his wife lived on in errant pennies, and for my sister, our mother had become a butterfly. I constantly looked for my mother after she died, and almost always found her. Flowers, rainbows, flickering lights — they were all her. She remained in my daily life for years after she was gone. So why was it so hard to explain where she was to my child?

I lived across the country for the last few years of my mother’s life, but we were still incredibly close. We’d talk on the phone three, four times a day, and, despite the fact that I wasn’t quite yet married, something that weighed heaviest on me — and probably her — was the notion that she’d probably never meet my children, should I have any. Cancer is depressing enough, so we didn’t discuss this, but every time we hung up the phone, I said a little prayer to the universe to have her hang just a little longer. Not forever. But a little longer. Maybe just so she could say hi to the baby I didn’t have yet.

When I had my first child — a perfect baby girl — I was head over heels in love, but also, I felt cheated. Cheated out of not having someone other than my husband who I fully trusted to hold my baby while I took a hot shower. Cheated out of not having someone come over with homemade pasta and an eagerness to fold laundry, like the mothers of many of my friends. But most of all, I felt cheated that I never got to thank my mother for everything she did for me, because, finally, I got it.

When my daughter was 4, she started asking questions about my mother. Where was she? What happened to her? Why does everyone have a mama except me? There was a part of me that anticipated this interrogation with glee. I had visions of a simple yet poignant conversation that concluded in a heavy embrace, damp eyes, and a life discovery. I didn’t know what I was going to say to my daughter exactly, but I knew that, in that special moment, I’d be able to channel my mom and speak my daughter’s preschool language all at the same time. It was going to be the perfect confluence of events. I’d kill it. But the truth was, I evaded the questions because I didn’t know how to respond.

Leaning my body on hers, I begged her to “give me a sign” that she was still with me when she passed. I hated saying those words to her. It felt selfish. There I was, asking the person who devoted her entire life to me for one more thing when she had only hours left to live. But I needed to know she wasn’t leaving me forever.

"Where's your mama?" my daughter asked one day during a Candyland intermission. "Why doesn’t Grandma Didi live with Grandpa?"

"She got very sick," I told her; the low-grade anxiety that I had just instilled an irrational fear of the common cold in my child settled in nicely. Doing great so far, Nicole.

"But that's not going to happen to me or you," I said, wondering if I had just given the impression that helmets and car seats need not apply to make her invincible. I was a terrible motherless mother. There were no misty eyes or embraces, and the only thing I learned was that mothers, evidently, do not always have the answers.

When I was 6, my grandfather died. I watched my mother’s face contort with grief at his funeral from the confines of the lobby where there weren’t any open caskets. I knew I was never going to ride scooters with him again and I felt sad, but I was comforted by the fact that he was "an angel in heaven." With my kids, I didn’t have that angle. I couldn’t tell my daughter that her haloed grandmother was fluttering around in the ethers, because, be it because of age or witnessing too many crappy events over the years or college or the internet, I no longer believed it. But I also wasn’t sure I believed my mother was a flower. The truth was I didn’t know how to explain death to a child because I didn’t understand it myself.

I tried to make up for my wildly awkward ineptitude a few days later. I sat my daughter down and told her that even though she couldn’t see her grandma, her love lived on. I talked about how proud my mom would have been of her, and, for inexplicable reasons, recited a Shakti Gawain quote I had once read in Oprah. “She loves you and she’s everywhere,” I said, pleased with my spiel. My daughter looked at me blankly and requested a breadstick. The death talks, clearly, were going to have to wait.

When my mother laid on her deathbed, I clutched her bony hands and told her I loved her. She couldn’t respond, as the cancer controlled her brain at that point, but she understood. She half-smiled and mumbled, “I love you, too.” I looked at her stubby scalp and thought about how only a few months prior, during a trial hair appointment for my wedding, she asked the hairstylist if she could “tease her wig a little” in an attempt to take part in the festivities. How could I go on without her? How could I go on without this person who, despite barely being able to choke down a piece of toast, made welcome baskets for all of my out-of-town wedding guests? Leaning my body on hers, I begged her to “give me a sign” that she was still with me when she passed. I hated saying those words to her. It felt selfish. There I was, asking the person who devoted her entire life to me for one more thing when she had only hours left to live. But I needed to know she wasn’t leaving me forever. She nodded her head yes and I believed her.

A few months after I had given up on trying to explain death to my daughter, she brought it up again. “Is Grandma Didi a fairy?”

So I interpreted everything to be her. As it goes for the bereaved, I desperately wanted to find the person I lost, so I did. Constantly. But in my more coherent moments, I was skeptical. Saying I believed that my mother talked to me through flowers out loud felt asinine, but believing anything else felt like a betrayal.

A few months after I had given up on trying to explain death to my daughter, she brought it up again. “Is Grandma Didi a fairy?” she asked as we walked home from her first day of school. Fairies were on her mind since that morning when, in a Pinterest Mom moment, I snapped a photo of her holding a tiny chalkboard that listed off things I want to remember. “Favorite color: Pink.” “Favorite food: Pasta.” “When I grow up I want to be: A fairy.”

“You said that Grandma Didi is everywhere and fairies are everywhere, too,” she said. My daughter is an expert on fairies. In addition to wanting to be one professionally, a fairy named Lily Pearblossom enters her room each night through a tiny door that’s Velcroed to her wall. She even leaves behind pink fairy dust.

“Maybe,” I said, as she broke free of my grasp and skipped ahead.

I don’t hear from my mother very much anymore, and the truth is, I don’t know if I ever did. But it’s OK. I’m OK. Because on some mornings, I learn that her glittery wings brushed against my sleeping daughter’s cheek the night before.