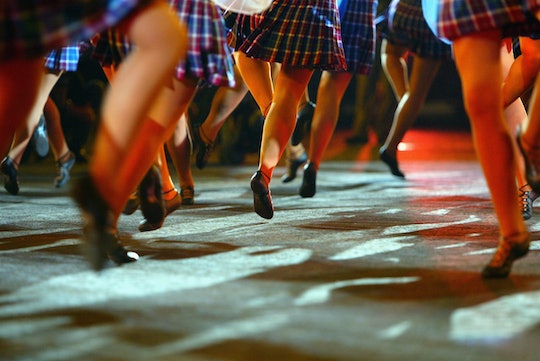 When my son was around 4 we had a family friend over for dinner. She taught Highland dance at a local studio, and before dinner she showed my sons a few of the more simple moves. The older boys were only half-listening but my youngest picked it up immediately. So quickly, in fact, that our friend asked him if he wanted to learn more, which he did. For about six months, until my 4-year-old son was shamed for dancing. Then, of course, it all changed.

By now I'm sure pretty much everyone has heard about Good Morning America's Lara Spencer and her ill-conceived comments about Britain's Prince George. It seems the 6-year-old has begun taking ballet lessons, which his father Prince William has reportedly said the little boy really enjoys, as per People. While reporting the news on live television, Spencer made a joke about Prince George taking ballet — and then quickly apologized as dancers and the people who love them admonished her on social media for perpetuating a tired stereotype. That girls dance and boys play sports, or whatever. The furor has died down somewhat as the internet moves on, but I'm actually kind of glad Spencer's comments caused such an uproar. Because for my son, it only took one person's comment to change the way he looked not only at dance, but himself. And there was no clever hashtag to protect him from that hurt.

For my son, Nathan, the first six months of Highland dancing were amazing. Every Tuesday he would don his little black shorts and t-shirt and Highland dance shoes to join his class for an hour or so of leaping vigorously to bagpipe music. He would come home and put on little concerts for the family, including my older three boys, of his "new moves" as he called them. We clapped and cheered and he went to bed with this new little seed of something growing inside him. I think maybe as the youngest of four boys, it was the first time something felt like it was just his.

Until I took him to class one afternoon. Until I sat in the waiting area with my coffee and my magazine and Nathan came storming out, red in the face. He said, "Take me home, I'm the only boy here. This isn't for boys."

He never told me who said this to him. There were several parents in the studio at the time. He just said over and over, "That was supposed to be just girls," like I had broken some ancient rule and left him to deal with the fall out. It didn't matter when I explained to him that men have been dancing the Highland fling for centuries, that he shouldn't give up something he loved just because of something someone said, that we all thought he was amazing. He never went back. To this day, as a 19-year-old boy, he is not someone who just dances for joy. That precious little seed was pulled out of him and it's never taken root again.

Nathan might not have been someone who went on to dance competitively, and honestly I don't really care about that. The thing he lost that day, the thing I wish he could get back all these years later, was a connection to his own personal joy. A connection that was broken by someone who probably never gave it a second thought.

This is why adults, especially influential people like Lara Spencer, need to take a beat before remarking on children's activities or hobbies. No one should be imposing their own history or ideas on young people who are just trying to enjoy life and figure out who they might become one day on their own terms.

If only I had been able to create a hashtag for him then. What might have been different?