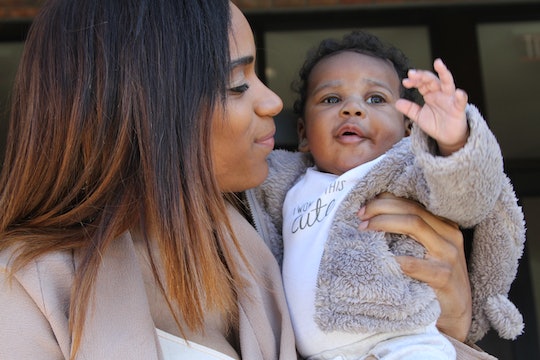 My Baby Almost Died After My OB Ignored Me, & I'm Pretty Sure I Know Why

African-American women are three times more likely to die from complications with childbirth, according to the CDC. But why? What is different for Black mothers? Serena Williams knows. And I know. My name is Brittany Bright. I'm a few weeks shy of 25 years old, and I have a 14-month-old son named Jaxon. Jaxon made his entrance into this world in total chaos, close to dying, all because my concerns during pregnancy went ignored.

It is Black History Month, and this is a core piece of Black history. My birth story is illustrative of the ways that the system fails African-American women through pregnancy and birth — of how we get to 44.

At the age of 19, while I was just getting into the swing of college life, I began to have lower abdomen pain. Because the pain persisted, I drove five hours home to see my doctor. During that appointment, I found out I had a benign fibroid tumor on my uterus. I was afraid, because I did not know what that meant. I thought to myself, "Will I ever be able to have children?" My OB-GYN assured me that whenever the time came for me to have children, I would only experience minor pain. So I pushed the thought to the back of my mind.

A few years later, I came across an article stating that the likelihood of fibroids is three to four times higher in African-American women, per the National Institutes of Health. I also discovered that African-American women are 2.4 more times likely to have a hysterectomy, as the Journal of Women's Health has found.

Imagine how worried I became! My grandmother had a hysterectomy because of her fibroid tumor. Could this possibly happen to me one day? I knew that I wanted children one day, but what would I have to do, so that I could avoid a full hysterectomy?

Again, my OB-GYN reassured me that I could possibly have pain later on in the pregnancy. She also mentioned I could go into preterm labor, but that there was no reason for me to worry beyond that.

I asked about my fibroid at every appointment. If it was an ultrasound appointment, I would ask how much the fibroid had grown — at the first ultrasound, it was bigger than it had been in 2012, which tracks with research I know now, stating fibroids do the most growing in the first trimester, according to PLoS One. I had four ultrasounds. I also had monthly, then bi-weekly, then weekly appointments. It was a very big concern for me because I did not want the fibroid to cause any harm to Jaxon.

I did not think a c-section would happen, but I used to worry that the tumor would press up against his umbilical cord or something bad like that. It turns out that fibroids lead to a 27 percent higher likelihood of a c-section, according to a study published in the Annals of Epidemiology. Still, the conversation was pretty much the same each time. My doctor would ask if the fibroid was giving me any pain, then remind me that pain closer to the end of the pregnancy is possible. She never mentioned the likelihood of a c-section.

I thought everything was OK.

I still remember the morning I went into labor very clearly. Despite going into labor two weeks early, everything was going according to plan. My OB-GYN was not on call that day, and therefore my baby was going to be delivered by a doctor I was not familiar with.

A few hours after I was admitted, I was given an epidural. Shortly after, the nurses and the unfamiliar OB-GYN rushed in, said, "that baby has to be delivered now," and rushed my family out of the room.

The doctor told my mother, "Kiss your daughter goodbye," as he guided her out of the room. I was wheeled to the operating room, and put under a general anesthesia.

The tumor was blocking Jaxon’s way out and cutting off both of our oxygen, which was causing his heart rate to fall rapidly.

Jaxon was born 13 minutes later. To this day, I don’t recall anything from when I was given the anesthesia until the middle of the next day. As I was recovering, the nurse came and explained to me what happened. Unbeknownst to everyone, the fibroid tumor had grown to the size of a grapefruit, or 10 centimeters. The tumor was settled in between Jaxon and his way out, was causing his heart rate to fall rapidly, due to lack of oxygen.

When did this happen? Was it something they knew about, and just did not tell me? Could they see the growth during my ultrasounds? Near the end of my pregnancy, Jaxon was growing a half a pound a week. Did it grow then? I had so many questions about my care. I wish this could have played out differently.

I’ll never remember the moment he was born. I didn’t get to hold him, hear his first cry, watch him take his first breath, or witness his first bath. The entire experience was taken from me.

As with Serena Williams' experience, I was aware of my condition during my pregnancy. I voiced my concerns about the tumor growing and causing harm to my unborn, Jaxon, but they were brushed off.

And it was a worst-case scenario.

Had the doctors given a little more attention to my situation, I believe an emergency c-section could have been prevented — at the least, I could have scheduled a c-section, and avoided some of the trauma. I also believe the rapid growth of the tumor was caused by the hormones during my pregnancy.

I felt lost after I woke up. I went to sleep pregnant, and woke up to a new baby. I did not get to witness his birth. I did not get to hear his first cry, or see him take his first bath. I will never remember any of those precious first moments. My family could not witness the experience either. I was all alone.

In the weeks following the delivery, I was sad. The bonding experience that happens in the hospital between a mother and child did not happen for us. Now, I realize that I am lucky to be here, and I am blessed to have given birth to a healthy, beautiful baby boy. Everything I went through was more than worth it.

It has been 14 months since that eventful day. I have had one follow-up appointment so far to measure the size of my fibroid. It has shrunk a little, to the size of an apple. Because I plan to have more children in the future, my OB-GYN has decided not to surgically remove it. However, all of my deliveries will be scheduled c-sections.

I am not sure what causes fibroid tumors, but there are a few risk factors. Out of the top three, I meet two of them.

The thing is, all women have risk factors. Pregnancy is a risk factor. Birth is dangerous. But especially dangerous when we ignore the concerns of our mothers, when their concerns go ignored. Every time I look about my son, I am reminded that lax care threatened both of us in a time when we should have had the utmost care and attention. We can do better.