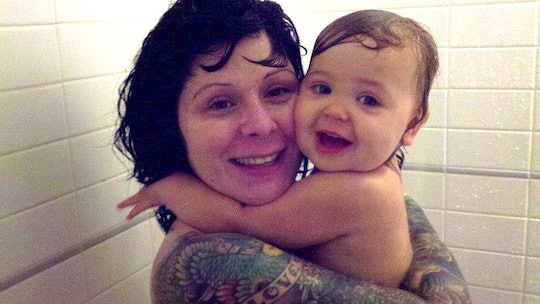 My Baby Gave Me A Chance To Get It Together

I was a very late bloomer. Deciding abruptly in my mid-30s that I was ready to have a baby was a way more involved decision than I thought it would be, but I didn’t know it then. Bringing another human into the world was my golden opportunity to take a hard look at my life and the way I’d been avoiding responsibility of all kinds. It was a decision to get it together on multiple levels, and to grow up and act like the adult I was, whether I realized it or not. The day we learned I was pregnant, my partner and I looked at each other wide-eyed, partly in excitement, partly in terror. He blurted out: Wait. What did we just do? I had no answer. As thrilled as I was to be pregnant, I realized all at once that I did not know how to take care of myself, so how was I going to take care of a family?

Well into my 30s, I was still single, staying out late, hating my job, barely living paycheck to paycheck. At 32, I stumbled into the job that changed my professional life. It didn’t pay terribly well, but I loved it so much that I built my entire career around it. At 34, I began the process of buying my first apartment. At 35, I got back together with the ex that would become my life partner, and when I was 36 we decided to get married and start a family. The pink plus on the plastic stick meant that soon the entire world — including the human that I was growing — would know that I had no idea what I was doing. Slowly, I began to pull myself together, but it felt like a journey that would last forever.

The first thing I did was put our financial life in order. I read some very basic finance books with a friend, and then my spouse and I took an online course. In a few months’ time we learned how to talk to each other openly about money. We were not earning a lot, but we realized that we brought in enough that with some planning, we could live a simple but comfortable life as a family. We learned to pay off debt and start saving. I maxed my 401k matching program. We did basic estate planning, established guardianship for our unborn baby just in case, wrote a living will, made each other our health care proxies, bought life insurance, and got all our other directives in place. We set up automatic payments for our mortgage and developed a system for paying our bills. We figured out how we would handle childcare once the baby was born, deciding that I would continue to work, and my now-husband would stay home and be the primary caregiver. We weren’t well-off, but that brought a sense of stability to our lives that I’d not previously experienced. We were as financially ready as we would ever be for this baby to be born, and we found that along the way we’d deepened our connection, too. Money is the leading cause of stress in relationships, and now that we’d found a way to discuss that with one other, we found talking about other stressful things to be much less challenging than it once was. We were establishing a family based on trust, mutual respect, and love.

I started to think about all the things and people and situations I was afraid of.

Then the baby was born. She was perfect and our life seemed perfect. Our relationship was strong; we owned our apartment; we had a beautiful daughter; we’d even started exercising regularly. I was going back to my dream job when my leave was up, and my husband was a new and enthusiastic stay-at-home dad. To the outside world, we looked like we’d gotten our sh*t together. But late one night between bouts of nursing and rocking and singing and willing my baby back into slumber, when I was desperately tired and afraid I’d never sleep again, I started to think about all the things and people and situations I was afraid of. I felt the weight of all the other baggage I’d carried around with me dating back to my childhood. I saw I’d been walking around with a chip on my shoulder, angry at everyone for what they had that I did not. I thought about how much resentment I had built up about so many things in my life because I was too afraid to ask for what I really wanted. I expected people to read my mind and I was furious when they didn’t. This awareness made me understand how little community I really had.

There in the dark, holding my sleeping infant, I felt alone and very unsure of myself. I did know I had some common sense and innate smarts, but I had no interpersonal skills.

While people were telling me it seemed like my life was all puppies and rainbows, inside I feared nearly everything and everyone other than my spouse and my baby. I didn’t know how to take up space in the world. I didn’t know how to advocate for myself. I didn’t know how to disagree respectfully or share my concerns. I shrank back from conflict because I so badly wanted the approval of everyone around me, but I didn’t know how to earn it or maintain it. I tried to connect to others but was easily intimidated by their strengths, feeling that the accomplishments of others translated into a loss for me. In my overtired state, I even wondered how well I knew myself or how to authentically become myself. I’d naively thought the work we’d done to organize our finances, our home, and our health would be enough to qualify us as adults, but I understood now that was just the beginning. I had to look deeper within. I was not brave. I was not a leader. But I wanted to be those things for my daughter. If I was going to raise her to succeed in the world, I had to find my own way first.

I was no tiger mom, but the one thing I was not afraid of was doing whatever it took to get my baby’s needs met. And when that baby was soon followed by another baby, this time one with significant special needs, I became protective but flexible, firmly but not aggressively outspoken, open to the suggestions of others and determined to do whatever it took to ensure that they both had what they needed. For my kids, that kind of balanced strength came easily to me. But I still could not do this for myself.

Getting there would be no easy feat. I knew I would have to make myself vulnerable, and risk making mistakes publicly. I knew it would be uncomfortable, but I was growing more willing.

Years in, it’s still hard. I do not like having to take a critical look at myself and my behaviors.

I began to set boundaries. I learned how to say what I meant, firmly and kindly, without over-apologizing. I recognized that the only way for people to know me or know what’s going on in my head is for me to tell them, so I practiced speaking up. I realized that people would respond better to me if I behaved authentically rather than behaving how I thought they would want me to, but I wasn’t yet sure what being authentically me meant. I forced myself to articulate to myself exactly how I really felt about things, so that I could pinpoint what I wanted and needed from any given experience. I practiced listening more actively to what others were saying so that I could better understand their perspectives too. In conversations, I began to visualize making space for both my needs and other people’s. I realized there were enough wins in the world that someone else’s success did not threaten the possibility of my own; that there was no limit to the number of strong people who could exist at the same time; that my opinions and hopes and dreams could stand next to another’s, no matter how different, and still be valid and real and good; and that if I spoke my truth with dignity, most people would be able to hear it and honor it even if they did not share it. I would no longer have to feel shame or fear just because I was me and not someone else, someone better, smarter, richer, thinner, more accomplished, more mature.

Pushing myself in this way was the hardest thing I have ever done. Years in, it’s still hard. I do not like having to take a critical look at myself and my behaviors and go through the painful process of owning my mistakes, showing up, honoring my commitments, and modeling esteemable behavior for my children. I do not like having to say the hard things and give the feedback and set boundaries and say no to stuff. It does not come naturally, even now. But the successes give me the strength to keep at it, for the girls, and for me.

Last week, I ran into a scheduling snafu that sent me into a tailspin of panic. My 8-year-old daughter was going away with her friend’s family for the weekend and I would be leaving for a week-long work trip before she returned. We’d be apart for eight days, and so close to the holidays! My daughter did not want to wait until we were both back to decorate our Christmas tree, so she asked me if we could do it that day after school, before she left. I said of course, and then checked my work schedule. My heart sank when I saw I had a 4 p.m. meeting with my boss. It can be hard to get time with her and I feared having to cancel. I can’t do it, sweetie, I started to say, but she cut me off. No, Mama! she cried. You promised! I felt stuck. I’ll figure something out, I assured her. I’ll have to beg my boss to reschedule.

My daughter looked at me, perplexed. Why do you to have to beg her, mama? she asked. Why can’t you just ask her politely?

I marveled at her. She was right: why indeed? You’re right, kiddo, I said. I can just ask her politely. And that is exactly what I did. In a brief email, I told my boss what I needed and asked politely if we could reschedule. She responded immediately. As it happened, she had just received a meeting cancellation for the following morning, so I could have that time instead. I thanked her once — not a hundred times as I am sometimes inclined to do — and she responded with: Of course! Go enjoy the fam!

So I did. Once my kiddo came home from school, I didn’t give work another thought that day, and I knew I’d done the right thing. To be learning from a child how to be a better adult might be the most humbling thing I’ve ever done, but it feels like an important part of my process.

In the same way my husband and I once learned to establish trust and understanding by talking openly about money, I was establishing trust and understanding with my daughters by being vulnerable with them and being willing to learn from them. Having my shit together doesn’t mean I’m perfect and that I’m ahead of the game. It means I am willing to hear feedback even from my own kid, because I love her and respect her enough to listen to her and I love myself and respect myself enough to believe I can continue to grow.