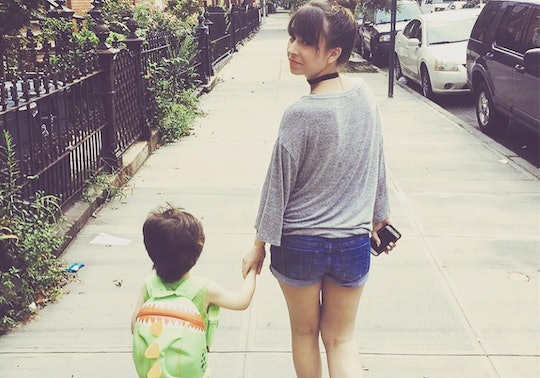 I am not what I would consider to be a sentimental mother. I don't lament about the passage of time, or even jokingly ask my son to "stop growing" or "slow dow" or beg the clock to stop. The way I see it, my son growing older, more independent, and more self-sufficient is my ultimate goal, and wanting anything else for him would be selfish and contrary to my job as his parent. But just recently an unshakable realization hit me with such overwhelming force that I was moved to tears: my baby isn't a baby anymore. And he will never be a baby again.

It was an otherwise run-of-the-mill day. His father was asleep in our bedroom, after just finishing a recent 10-hour night shift, so my son and I went to the local donut shop for a special breakfast and some quality time outside of our Brooklyn, New York apartment. We then walked to the park to enjoy our spoils and run off the excess sugar. The sun was almost oppressively warm, but a slight breeze made it bearable and the smile on my son's face was unmistakeable: this was his one-on-one time with his mom, and he was happy.

As we approached a crosswalk I reached out for my son's hand and, without a thought or hesitation, he slipped what was once a pudgy baby appendage into mine. Only, his hand wasn't the small, delicate hand I had become accustomed to holding in parking lots, across busy streets, and at home while we're cuddled up on the couch. No, this hand held me tightly, and its grip was firm, and it resembled the hand of a small-but-increasingly-independent young boy. A boy who was just starting to learn about himself and the world around him. A boy I had envisioned one day running at playgrounds, reading books, and begging me for just one more piggyback ride. A boy that was as defiant and stubborn as he was sweet and loving. A boy I was just starting to learn about, too.

It's odd, that a seemingly minuscule moment could usher in a realization I had, up until this point, simply avoided. It was as if I had spent the last three years wandering a desert made up of my baby's innocence, and in an instant the mirage disappeared and my baby vanished.

Yes, my son will always be my "baby" in that I will forever care for him, love him, and support him. But his "babyness" is no more, and it never will be again. He will stumble, sure, but he will never walk with as much uncertainty as he did when he took his first steps. He will struggle to articulate himself and his feelings, I have no doubt, but never will he slur his still-forming words in a small yet eager mouth just learning to grasp the very basics of the English language. He will come to me for advice, yes, but never again will he call out for me in the middle of the night and with a very distinct cry that says, "Mom, I need you and only you."

That's all I have now: visions. Moments cemented into my memory that remind me of my ultimate goal as a mother.

My baby is gone, and while I am thankful he is growing and learning and evolving and becoming a more independent person, there is a part of my heart that feels empty. The part still searching for my baby's pudgy little hand to hold. The part that will probably continue that search for the rest of my life.

I fought back an increasing number of tears as we crossed the street, my son squeezing my hand every few steps. And once we made it to the other side he let go immediately and ran ahead of me towards the park and a few of the friends he already recognized. He didn't look back, his hands flailing by his sides as he awkwardly propelled his 3-year-old body forward, and I was left with visions of the moment he sat up for the fist time, stood for the first time, crawled for the first time, walked for the first time, and said "mama" for the first time.

In my brief moment of grief, and as a mourned the loss of my son's babyhood, I realized that he's gaining a life; the very life I had hoped he would live when that pregnancy test turned positive and I heard his heartbeat for the very first time and I felt his small-yet-defiant fists push against the barriers of my womb.

I realized that I have to cherish this painful moment, too, because while I no longer have my baby's hand to hold, I do have my toddler's. And, eventually, I won't have that hand to hold, either.