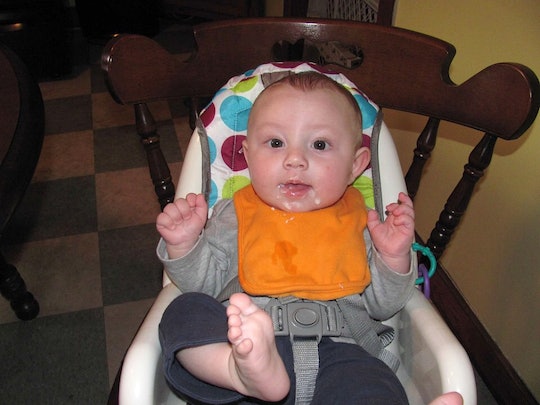 My Baby Needed Hypoallergenic Formula, & I Was Totally Unprepared

When my second son was born four years ago, nearly three months of sleeplessness, fussiness, and discomfort finally resulted in a diagnosis of cow’s milk allergy and gastroesophageal reflux. The reflux made breastfeeding almost impossible (he was too uncomfortable in most traditional nursing positions), so we switched to formula feeding. But he couldn’t tolerate any of the formulas for “sensitive” stomachs--most of them still contain a broken-down version of the protein found in cow’s milk and trigger reactions in kids with cow’s milk allergies. The only thing he could tolerate was an “elemental” hypoallergenic formula designed to pass as easily through his system as possible.

“Elemental formulas consist of amino acids, which are the basic building blocks of proteins and represent the most broken-down form of protein you can get,” says Meagan O’Neill, M.D., pediatrician for Riley Children’s Health at Indiana University Health.

Soon after our pediatrician recommended we put our son on a hypoallergenic formula, I realized I was in foreign territory. There weren’t many resources for parents, even online. And, as it turns out, putting your baby on hypoallergenic formula is not as simple as mixing some powder and sterilized water in a bottle. On top of the outrageous price tag for each can, there were a host of side effects that no one warned me about.

When parents talk about food allergies, most are referring to older kids, not babies.

It all left me wondering: how many other mothers out there were completely unprepared for the trials and tribulations of allergen-free infant feeding? Dietary allergies affect approximately 1 out of every 13 children, and cow’s milk allergy, which is the most common, affects about 2.5 percent of babies in the first two years of life. Were those families getting the support they needed? Probably not, because there wasn’t much support to be found: when parents talk about food allergies, most are referring to older kids, not babies.

Here are all the things I wish someone had told me before I gave my son his first bottle of hypoallergenic formula.

Be prepared to go broke (or jump through dozens of insurance hoops). Hypoallergenic formula costs about $40 per can. Depending on your baby’s age, you could go through anywhere from one to three cans a week. I crunched the numbers, and it was WAY outside our budget.

The good news was that our insurance company agreed to cover the cost of the formula. The bad news was that we needed a pediatric gastroenterologist to write the prescription, which meant we had to first be seen by one (and getting an appointment took several weeks).

Once we had seen the specialist, we filled out form after form, and submitted authorizations, medical records, and signatures to our insurance company--then we waited for approval. Meanwhile, our pediatrician encouraged us to swing by the office every week to collect some of their free samples. They knew we were struggling to afford it out-of-pocket. If you’re in the same boat, don’t be shy about telling your pediatrician; they may be able to help.

“I engage my clinic social workers, as well as my colleagues in allergy and gastroenterology, to see if there is a generic or less costly formula alternative [for these families],” says O'Neill. “Sometimes expediting the process of allergy testing to confirm the diagnosis can assist with insurance coverage, though not always.”

Everything your baby’s spit-up comes into contact with will turn gray. Once my son actually started drinking the hypoallergenic formula, he felt much better (thanks to some additional help from probiotics and a prescription antacid). But one downside to the formula was that it left a seriously nasty stain. Most of my son’s onesies, burp cloths, and swaddles were marked with gray spots, streaks, and splotches. Not even OxyClean could touch them.

If I had known this ahead of time, I would have dressed him in cheaper, less sentimental clothing. I ended up recycling or throwing away several quality hand-me-downs from my first son — favorite sleepers and sweaters — that I would have liked to hang onto as mementos.

Your baby’s burps and spit-up will smell awful. While we’re on the subject of spit-up, hypoallergenic formula not only stains everything it touches, it also smells, well, strange. Kind of like sour potatoes (a weird description, I know, but it’s the one my husband and I agreed was the most accurate). You’re going to do a lot of laundry, because when that spit-up gets onto your baby’s clothes — or yours, for that matter — you will want an outfit change ASAP. And don’t even talk to me about the smell of his burps after feedings. I still get nauseated thinking about it.

Having a baby with a cow’s milk allergy is no picnic. But it is doable, with the right resources and a lot of know-how.

You thought newborn poop was weird? Just wait. Sure, postpartum meconium is gross, and the seedy, mustard-yellow poops of the newborn days are unpleasant. But neither compare to the bowel movements your baby will have on hypoallergenic formula. They’re hard to describe, but “toxic sludge” is a good start.

My son’s poop was dark green in color, and had a loose, mushy texture, all thanks to the hypoallergenic formula. “Elemental formulas in particular have... a large number of solutes that are not absorbable by the intestines. They keep a larger proportion of water inside the intestines than would normally stay there, which translates into more liquid-like stool,” O'Neill explains.

The science behind it makes sense, but it’s pretty disgusting. You might want to give your babysitter a heads-up.

When your baby turns one, most things get easier. Many babies are able to slowly transition away from hypoallergenic formula once they pass the one-year milestone. My son graduated from it around 13 months, and we were able to introduce cow’s milk without an allergic reaction. Even if your baby isn’t ready then, most kids don’t require continued use of formula beyond their first year: the introduction of more solid foods means that your pediatrician can recommend alternative dairy options, like rice or soy milk (remember to be aware of milk ingredients lurking in other products).

Having a baby with a cow’s milk allergy is no picnic. But it is doable, with the right resources and a lot of know-how. The trouble is, most moms aren’t given the resources or know-how before they start using hypoallergenic formula. O'Neill recommends parents check out Healthy Children from the American Academy of Pediatricians or Allergy Ready for more information.

But the most important thing to know? Your baby’s cow’s milk allergy is probably not a lifelong affliction. Be patient: if he or she is anything like my son, they will be on a steady diet of dinosaur chicken nuggets, cheese crackers, fruit snacks, and juice boxes before you know it. (But you’ll never sniff a potato the same way again, I promise.)