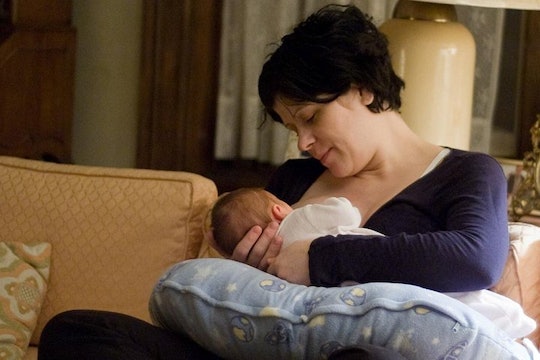 My Body Wanted Me To Stop Breastfeeding My Older Child

I loved nursing my baby from the very moment she was born. After an effortless conception and a pregnancy that felt like 39 weeks and five days of beautiful, blissful blossoming, I'd had a horrific and unplanned c-section that I now know probably could and should have been avoided. I’d always planned to nurse, and now I felt like nursing would heal both me and my baby and move us past her rocky beginning. It did exactly that. She was a hungry baby who latched on right away and I, adopted as a baby and thus never breastfed, felt accomplished and triumphant and so, so loving. But my body struggled.

More Like This
9 Things Not To Say To A Pregnant Woman On Mother’s Day
Are You Breastfeeding & Also *Starving* At Night?
Um, "Rusty Pipe Syndrome" Is A Thing, & Every Breastfeeding Mom Should Know About It
Experts Offer Tips On How To Wean — Whenever You’re Ready

I'd read over and over that "if it hurts, you're doing it wrong," but that’s simply not true. My baby was a nursing natural. In the hospital, the nurses praised me over and over. She nurses like a second or third baby! I can’t believe she’s your first! I was so proud, but it was beginner’s luck. When I got her home, my confidence faltered. I had to learn all over again. I turned to my stack of baby books, flipping through pages, desperate to find a how-to manual. I remember the day my milk came in. Her greedy gulps of new milk cracked my nipples so badly that blood ran down the sides of her mouth and I sobbed with pain for three days. Breast pads, nipple cream, and sheer determination to stick it out saved me from giving up, and I was so glad I did. A day later the engorgement was gone, I was healing, and my daughter was nursing fine.

I was one of the lucky ones: I loved it, she loved it. My husband loved it, too. A lifelong tiny-breasted 32A, I had gained an enormous amount of weight during my pregnancy, and post-baby it felt like I retained it all in my boobs. I had accumulated a drawer full of nursing accoutrements: bras in sizes I didn’t even know bras came in; nursing tanks; nursing blouses; nursing dresses.

Most of the time I didn’t even bother with the nursing tops. I just held her in my bare arms to my bare chest, or, if I wanted my hands free, I’d weave the Moby wrap around her little cloth-diapered bum. Her mouth stayed latched to me. We slept that way at night, my baby nestled into me, my body curled around her, her mouth on me, nursing in her sleep. I loved the skin-on-skin contact, my baby’s body against mine. I loved her smell. I loved being so close. I had adequate milk supply: enough that I never needed to supplement with formula and not so much that I had stockpiles in the freezer that I didn't know what to do with. She never took a pacifier; she always preferred the breast. So I took her wherever I went those first six or eight months, nursing her anywhere and everywhere, on the subway, in restaurants, walking down the street. I never bothered with a blanket or cover; I was an in-your-face breastfeeder but I didn’t think anything of it. I was just a mother feeding her baby. I was my birth mother and my adoptive mother, at one with motherhood, bonding with babies everywhere.

Because I was 37 when she was born, the decision to have a second child wasn’t something we felt we could belabor.

Back at work, I became engorged within an hour of leaving her: on the subway, at the sound of another baby’s cry, listening to a sappy song on the radio. I had dried, regurgitated milk stains on my shoulders and two whitish dripping targets on my shirts; marks that refused to come out in the wash. I schlepped my Medela messenger bag pump everywhere I went and pumped dutifully, assembling the pieces and suctioning it to my breasts in the strangest of places. The “lactation room” at work (a former broom closet swept out and given a lock on the inside and a hasty coat of paint, with a comfy chair and side table tossed in almost as an afterthought). A friend’s apartment. Airports. Doctors’ offices. The accessible stall in the bathroom at business school. (“Do you hear that weird sound? What is that?”) Wherever I was, I was lulled by its insane and mechanical song wacko wacko wacko wacko, dozing off and rousing myself awake by looking at pictures of my baby to stimulate my milk production. It was messy and challenging work, but it was all good because my baby loved it and I loved her.

Because I was 37 when she was born, the decision to have a second child wasn’t something we felt we could belabor. My body complied. When our first daughter was five months old, my period returned even though I was still exclusively breastfeeding. By the time she was 10 months old, I was pregnant again. She was eating some solid foods, but she preferred to nurse and I was determined to let her. I had no intention of weaning until she was ready, and she had no intention of giving up the boob.

A friend of mine, mom of identical twin boys, told me stories of how her sons held hands as they nursed. I had no idea that tandem nursing was a thing, but the image of a babe on each boob stuck with me. I looked it up and found my friend was not the only one. I wrote in my pregnancy journal: this time I have to be prepared to tandem nurse so I have to remember that it did hurt at first and it will likely hurt again, and hurt more since there will be two with different needs from nursing and different mouths, different latches, et cetera.

The physical pain turned into an aversion to being touched by her, by anyone. I began to recoil from my own child and spouse.

My body, however, had other ideas. Halfway through my pregnancy, I started to feel pain when I nursed. My baby, now a toddler, still climbed my growing belly, draping herself over it like it was a shelf made just for her, hanging one arm limply over my shoulder, the other wrapped around my side. Mee-owk, she’d say. Mee-owk. More mee-owk. But as my belly got bigger, my breasts hurt more and more. Nursing became at first unpleasant, then outright painful. I vowed to stick it out because I’d done it once before, and these are the sacrifices we make for our babies, right? It would pass, and if it didn’t, I thought I could bear the pain until the second baby was born. But the physical pain turned into an aversion to being touched by her, by anyone. I began to recoil from my own child and spouse. I believed in baby-led weaning with all my heart, but the truth was that I suddenly didn’t want her or anyone else anywhere near me and I was starting to hate myself for it.

I had no choice but to wean her. She was 16-months-old when I did it. I transitioned her from our bed to the crib in her room at the same time, an absurdly lengthy process that took us from the bed in our room to a sleeping bag on a mattress in the doorway, to just past the door out into the living room, inching closer and closer across the apartment to the doorway of her room, and finally to lying on the floor next to her crib. It was ridiculous: me, hugely pregnant, sleeping fitfully on the floor with my toddler, next to her empty crib, waking with her, unable to ignore her cries for mee-owk, offering her instead my arms, my pinky, my love.

We both suffered for three nights that felt like three years.

My guiding philosophy as a mother is that life is frustrating and it’s not my job to protect my children from frustration but rather to teach them to cope with it, to understand that when life is hard and Mama can’t fix it for them, I still love them and support them and will hold them while they cry. So I held her. She cried. I cried. I was exhausted but I would not let her cry it out. I stayed with her and held her, her tears mixed with mine and she begged for mee-owk, mee-owk, and I questioned my decision to wean her and, much like the three days it took to begin our breastfeeding journey, we both suffered for three nights that felt like three years — she begged and she pleaded and she fussed and she fought and then she woke up one morning and she was fine. Totally fine. She never asked for it again.

My nipples healed and my aversion faded. It happened so quickly that I wondered vaguely if the whole experience had been in my head.

Two months later, I had my second daughter in a beautiful, peaceful home birth. She, too, latched on right away, and she nursed around the clock for the next two years. By that point I had been pregnant or nursing, or pregnant and nursing, for over four years and was finally ready to reclaim my tired breasts and the rest of my body with them, so when she weaned herself shortly after her second birthday but hung fiercely onto her baba instead, it happened without any protest from me.