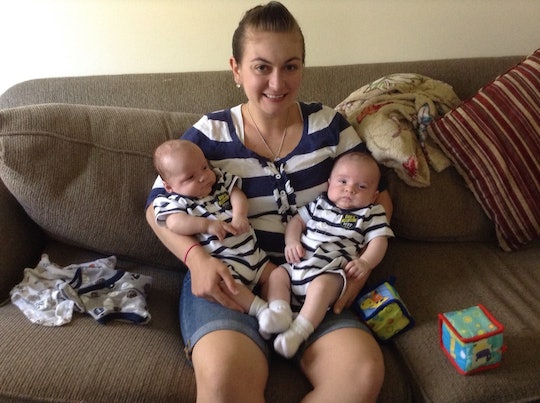 My C-Section Made Me Feel Like A Total Badass

When you meet a new mom, one of the first topics of conversation that always comes up is your birth story. I don't know if this impulse is encoded in our DNA, or if the doctors perform some strange procedure on us while we're recovering in the hospital, but either way, all moms feel compelled to share their birth stories with strangers. My own story starts with an attempt at a vaginal birth and ends up with an emergency c-section.

Usually when I share my birth story with a new mom acquaintance, my words are met with a sympathetic smile; if she's a hugger, she might give me a heartfelt shoulder squeeze. While I appreciate the gesture, the sympathy is unnecessary. For me, I don't think of my c-section as my birth plan gone wrong. Having an emergency c-section made me feel empowered by my delivery.

When I found out I was expecting twins, I wasn't sure if I'd even have the option of trying for a vaginal birth: many twin moms don't have a choice, because of how their babies are positioned in the womb. But my OB declared me lucky when ultrasounds showed that both my boys were head-down and in position for a ride down my lady chute.

I was a little nervous going into labor because my babies were only 33 weeks along in their development. However, I had started going into labor even earlier at 27 weeks, and I'd managed to keep them in me a little longer. Plus I had developed a condition called cholestasis late in my pregnancy, which increased the risk of stillbirth the longer I remained pregnant, so a big part of me was eager to deliver the boys safely. Even though I knew my boys were likely headed to the NICU, at 33 weeks the odds were in their favor.

Going into the delivery room, I wasn't nervous or scared about having a vaginal birth. I'm a take charge type of person and I'm fairly athletic, so I thought I had things under control. I had taken a few birth classes and read all the books. I had watched a ton of labor and delivery videos on Youtube. I had an epidural, so I wasn't in pain. I was focused and ready. I figured 20 minutes max and presto, I'd be a mom.

I felt like I was part of a baby-making farm, just another cow about to drop a few calves. Instead of feeling like the moment was special or life-changing, I felt totally out of control.

But to my surprise, I hated trying for a vaginal delivery. A funky-shaped curve to my vaginal canal was making it hard for Baby A to get past my pelvic bone. And my epidural was working a little too well, so I had no idea when it was time to push or how hard I was pushing. I looked at the monitors for hints about when I was having a contraction, but it didn't seem to help much.

For hours, people were shouting at me to push and doctors were clustered between my legs doing who knows what. My doctor would come in and out as he checked on other patients. I felt like I was part of a baby-making farm, just another cow about to drop a few calves. Instead of feeling like the moment was special or life-changing, I felt totally out of control.

All I could think about was my extended family in the waiting room and how worried they must have been. I kept dwelling on how my mom told me time and time again when I was pregnant not to let the doctors perform an episiotomy on me. She had one when she delivered me decades ago, and she said it was the worst part of recovery. So I lay there with my feet in the stirrups, asking my doctor between contractions to please, please not cut me. I wondered if I had enough feeling in my legs to attempt a karate kick if I saw him reach for a scalpel.

I thought labor would be another type of an endurance challenge, but instead it felt like an out-of-body experience. I found myself not even excited about becoming a mom anymore. I just wanted the chaos to be over.

As a dancer and someone who works out a lot, I'm usually really in tune with my body. I thought labor would be another type of an endurance challenge, but instead it felt like an out-of-body experience. I found myself not even excited about becoming a mom anymore. I just wanted the chaos to be over.

Finally, after three hours of pushing with still no babies to show for it, Baby A's heart rate started to drop. My OB made the call to recommend a c-section, right then and there. I expected to feel disappointed about how things were turning out, but instead all I felt was relief and excitement. The entire mood in the room changed when we switched into c-section mode.

My OB put on a playlist of awesome 90s hits, which significantly lightened the mood. I started making jokes with my nurses. Instead of having no idea what was happening and where we were in the labor process, I was able to ask questions as the nurses gave me a play-by-play description of what was going on behind the white drape. It sounds counterintuitive, but allowing my doctor to remove my babies surgically was just what I needed to feel in control of my own labor.

It sounds counterintuitive, but allowing my doctor to remove my babies surgically was just what I needed to feel in control of my own labor.

Even after the surgery was over, I still didn't feel like I had "failed" by not having a vaginal delivery. I felt like I had rocked it. A c-section is a legit surgery, and I managed to recover all while going back and forth from my home to the NICU for a few weeks, on practically zero sleep. Suddenly I understood what all those "Moms are superheroes" memes were talking about, because that's exactly what I felt like. Ye,s it was difficult, but I was doing it, and thriving. That made me feel amazing.

Even now, more than 4 years later, I still get excited when I talk about my c-section. If my scar weren't indecently low, I'd probably show it off to people when telling my birth story. For me, having a c-section is what made me feel like I was in control of my own labor and delivery. My only regret is not scheduling one from the start.