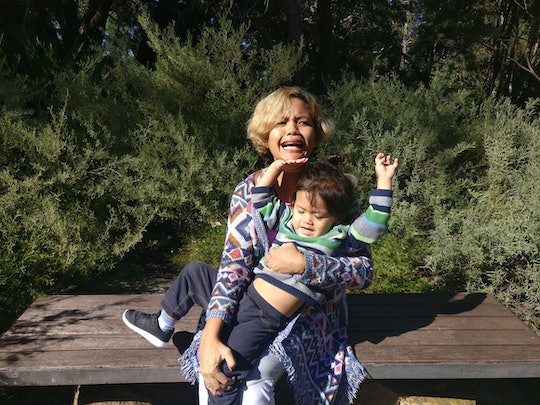 A Mom At Our Baby-Mommy Class Turned Everyone Against Us

A vast majority of moms — if not every single one — ends up becoming their kid’s number one fan. You can’t help it. It’s human nature to love something you’ve made with every fiber of your being, no matter what. As a mom to an adorable 2-and-a-half-year-old toddler, I find my son’s every smile, every gibberish word uttered, every tiny jig, and yes, even every fake pouty cry, utterly adorable. In my eyes, he is perfect. Which is why it boggles my mind when somebody else doesn't like my child. This is the story of how my child came to be left out of his gymnastics class, after one mom turned the other parents and kids against him.

For the first two years of his life, my son was an only child (I recently gave birth to a new child, yay!), so naturally, he was not used to being around people apart from his parents and nanny. In an effort to get him to expand his social skills and amount of interaction with other kids (we had just moved from the United States to Singapore, so this was also an opportunity for me to make new mom friends), I enrolled him in a parent-accompanied gymnastics playgroup. At first, he was very timid and shy, as expected. He didn’t really participate in the group activities and preferred to be an observer on the sidelines; when the class had moved on to the next activity, that’s when he would be comfortable enough to give the previous one a try. We knew it would take time for him to open up.

But once he did, oh boy, did he do so with so much gusto! After several once-a-week sessions, my bubba became super active — almost hyperactive! — and we initially took it as a good sign that he was becoming more used to playing with other kids. He would be excited upon seeing the doors to the classroom, and upon entering the play area, he would immediately run toward the nearest kid.

One thing I should note about my child is the fact that he’s got a tiny bit of a speech delay, probably caused by too much independence at home, where we allowed him to play by himself too often and with minimal interaction. It was a problem we were actually hoping to correct in class, and I guess because of this inability to express his joy in words at seeing his classmates, he resorted to slightly aggressive behavior like tackling or hugging other kids tightly.

I was convinced that this mom, who often spoke in hushed tones with other moms, had a personal vendetta against me.

While most of the parents (and most of them, dads) just laughed it off or chalked it up to normal toddlerdom, there was one particular mom who took my boy’s antics a little too personally. Rather than tell her son (who seemed pretty advance for his age, since he was already talking in simple phrases and taking action cues from the adults pretty well) that it was OK, that he wasn’t hurt badly and that it was just his classmate’s way of expressing excitement at being able to play together, she would either pick up her son to try and place him in a different area in the gym or act as a human barricade between her child and mine. Normally, I wouldn’t care about that so much — I believe that every parent has their own style in molding their babies into good human beings — but her actions had very obvious repercussions that affected not only, in my opinion, her toddler’s development, but everybody else’s in class.

Now, instead of being patient with my tackle-and-tight-hug-hungry kid, the tot had decided that fear was the appropriate response and would cry whenever my poor baby would get a little bit too close to him.

And that kind of reaction? It can unfortunately spread like a cancer in baby-mommy groups. The usually healthy “kids will be kids” atmosphere all of a sudden transformed into a blame game on bad parenting, and I became incredibly paranoid. I was convinced that this mom, who often spoke in hushed tones with other moms, had a personal vendetta against me because she never exhibited, in my opinion, the same level of friendliness when talking to me. I became a hundred percent certain that she thought I was a bad mom, based on how my child interacted in class. Pretty soon, it felt like a growing number of kids in the class were distancing themselves, aided by their overly cautious mommies. Furthermore, every time a toddler fell or wiped out within my child’s vicinity, moms would immediately come rushing to intervene and check for injuries, as if to suggest my son caused the tumble. (He did not, he just happened to be close by.)

What am I supposed to do in this situation?! These are young children and these things often happen. Here I am, trying my damnedest to help my firstborn grow into a well-adjusted and social individual by placing him in an environment of same-age kids, only to be met by helicopter moms who give me cruel side eye and fake pleasantries, all while physically blocking access to their children during playtime. Aren’t we all parents here? Shouldn’t we be all in this together?

I often think of the moms in the other gym, though, and what I could have done to remedy the situation.

Of course, I did what every concerned and loving mother would do for their offspring. I consulted his teacher about his behavior, who thought it was perfectly normal for him to show aggression in lieu of words. He gave us helpful tips to use at home to get him to understand the meaning of “soft touch” as well as other common instructions used during playtime. He also recommended we see a developmental pediatrician for a more professional analysis, if we were really worried about his speech delay.

I did not re-enroll for the next term and decided to switch to a different play gym closer to home. After a few trial classes, I observed that my child was more engaged in the activities, and more importantly, the parents of the kids in this class didn’t give a crap if their young'uns wiped out (or if my son was involved somehow). Kids were finally allowed to be kids. Currently, my son is enrolled in an independent (no parents) 2-hour playgroup four times a week, and as far as I know, he’s not known as the class Hulk Hogan, which is a relief.

I often think of the moms in the other gym, though, and what I could have done to remedy the situation. I’ve always been cordial, always had a friendly smile to offer, and often initiated small talk about our kids. Should I have done more? Should I have confronted that one mom about my concerns desire for our kids to get along and talked about solutions on how to get there safely and without incident?

I have learned at an early age that not everyone you meet is going to like you. This piece of reality is true for anyone from any walk of life, and unfortunately, if you are a new mom hoping to infiltrate a well-established baby-mommy class, this fact becomes a lot harsher. Someone is almost always going to have an opinion about how you parent, and most of the time, these opinions will not be expressed to your face.

Although it sure would have been nice to have new mom friends in a foreign country, I’ve had enough experience with mean girls in the past to know what it felt like to bark up the wrong tree. It would’ve been an exercise in futility: In the same way I hate being criticized for keeping my boy’s hair long, I’m sure other parents wouldn’t be that welcoming when a stranger came and pointed out that there are other ways to ensure safe play among children that didn’t involve fear mongering. If you are a parent and I told you that children are sponges that naturally absorb the feelings we project in their presence, would you have considered an attitude adjustment? When it comes to our kids, we often have a hard line defined, one that shall not be crossed no matter the cost. That is totally OK.

I guess I just want to make sure that my hard line is encased in patience, understanding, and love, and that I’m not tempted to expect or assume the worst in any situation involving my kid and others’. I am hoping I get to meet like-minded mommies to commiserate with someday.