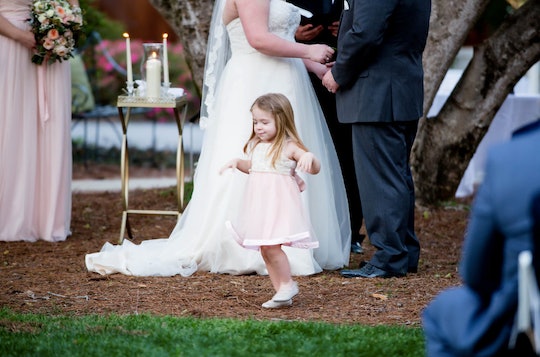 When my husband and I got married, my daughter was just 2.5 years old. She wore a pink and gold dress without a fuss, she walked me down the aisle without even attempting to let go of my hand, and she made it through the entire ceremony and about a third of the reception before blissfully falling asleep in my mom's arms. Not once did she lose her cool or act how so many expected a 2-year-old to act, and I honestly think it's because we basically made the entire wedding about my kid and our becoming a family.

I know, I know. It's a debate that's been rehashed a thousand times: which comes first, your marriage or your children? But for my husband Nick and me, our marriage was centered around our child. We started talking when our daughter Alice was just 7 months old, she sat between us on our first date, and when Nick proposed, he asked both Alice and me if we were ready forever. (We were. From like the moment we met him.)

It just made sense that our wedding have our little girl as involved as possible. And I honestly think letting her pretty much run the show is why she was so chill. Also maybe the bag of Cheez-Its in my mom's fancy evening clutch.

Alice was supposed to hold a ball of Baby's Breath when she walked down the aisle, but she wanted my mom's corsage instead. In nearly every photo of us during the ceremony, you can see my mom's corsage clutched in my hand after Alice insisted I carry it.

She was supposed to stand with us during the ceremony — I imagined a blissful scene of her holding our hands, looking up at our pastor with a look of awe on her face. Instead, she stood in front of the crowd and made faces, talked out loud, distributed pine straw from around the tree we said our vows under to the guests in the front row, and untied Nick's shoes.

During our reception, the three of us planned a family dance, but Alice wasn't interested. Instead, she rested her head against my shoulder as "My Girl" played and Nick swayed us both. And when my best friend and maid of honor was ready to break it down on the dance floor with me like our college days, we took turns gettin' low with a 2-year-old slung over our shoulders.

I spilled red wine down my gown when I was trying to pick Alice up, I could smell poop in her diaper during the ceremony, and our photographer blew approximately eight billion bubbles so she would smile. But I wouldn't change a single thing.

Our wedding was centered around our kid — including the plan we put in place to have her whisked off to the hotel with a family member when she got too sleepy — and so many things changed based on her mood. That ball of Baby's Breath was a waste, and her long beautiful hair was held back with nothing but bobby pins when she got fussy with the flowers behind her ear.

Oh and some of the photos? She's visibly upset and I nearly ruined my gown from holding her — all because she wanted Daddy, and I had to lift her up to spy on him from the bridal suite window. I mean, that's the kind of meltdown our wedding was centered around: love.

I don't believe in the stereotype of the bride who thinks it is all about them. Weddings are about more than yourself, and more than just your relationship. For us, it was undoubtedly and deliberately about Alice, from the moment we got engaged to the moment I picked out a dress. She was always going to be the center of attention, and we feel so lucky to have had her there.

When it was time to cut the cake, she got the first piece.