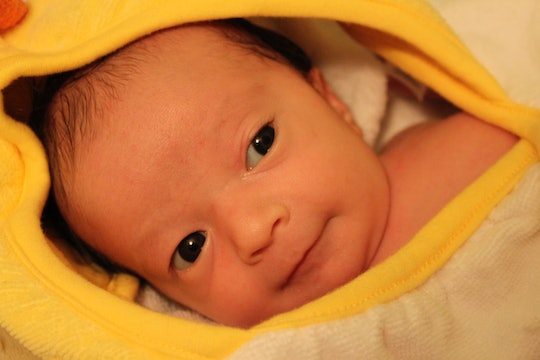 Today, I saw a baby — a small, little baby with a full head of hair. I looked at her, directly at her, and I didn’t find myself flung backwards in time into maternal post-traumatic stress thinking about what happened to my own daughter when she was a tiny baby with a beautiful full head of hair. This is progress, I thought to myself. But there were tears in my eyes, and the friend sitting across from me looked at me questioningly. “I have a hard time with babies still,” I said. I offered this empty explanation as I paused, wondering how to verbalize the combination of fear, envy, stress, and pain that makes me regularly pretend I don’t see the infants all around me. This time, sitting across the table from my friend’s kind face, I couldn’t find the words, so I gave up.

After five years, after having discussed it many times with doctors, after having written a short book about my daughter’s cardiac arrest, I still struggle to explain myself to other mothers. To be honest, I’m afraid of talking to other women with kids about Esmé’s cardiac arrest. I am afraid to frighten them. I'm afraid I'll become overwhelmed with emotion and start crying. So, I speak stiffly, as if I am reading from Esmé’s medical file: “When she was 3 months old, Esmé had cardiorespiratory arrest and chest compressions in the ER.” I deal only in facts in order to maintain my own composure as I speak these painful words to someone whose reaction is unpredictable.

Unsurprisingly, I suppose, it seems like my poor presentation is often misunderstood. I see the struggle as others try to understand whether this is a cautionary tale that reads like, "Your baby's heart could stop too! Be very, very careful!" or a mic drop, like, "Oh, you think that's bad? My kid's heart actually stopped." But I mean it as neither. I tell the story of what happened to my daughter in an effort to connect — a way to share my pain with another parent, someone I know can empathize. However, it isn't always received that way. After sharing what happened, I often find myself comforting another mother, telling her that what happened to us will likely never happen to her, or that, yes, their child’s vaccination experience was very traumatic too, or nodding my head to tell them that I know “God only gives you what you can handle." Sometimes, after I share my story, I watch the conversation stop dead entirely. As a result, I’ve started to shy away from saying much of anything at all.

The unknowns, the things I felt but were not recorded by doctors, began there and spread into infinity.

I want to explain our story in part because I want to connect, but also because I feel like my daughter’s cardiac arrest taught me things I want other mothers to know — the beauty of a child's heart beat, the reach of a mother's love, and the things you see from the other side of trauma. So let me tell you a story about a baby, and how her heartbeat began and stopped and started again.

When my daughter Esmé was born, there was little doubt that she was quite different from most babies. Her medical file would tell you that she was born full-term after an unremarkable, short, unmedicated labor, but that within moments of her birth it was clear that she was not breathing well. When she was five hours old, Esmé was transferred to another hospital and placed in the Neonatal Intensive Care Unit (NICU). The week’s worth of medical notes detail the things we’d slowly come to know: Our daughter was presumed to have an unknown genetic disorder that caused a heart abnormality, kidney abnormality, general weakness and low muscle tone, and unusual facial features, to name a few.

The unknowns, the things I felt but were not recorded by doctors, began there and spread into infinity.

By the time we walked in the door, Esmé was in respiratory distress, her body limp and blue-tinged in my arms.

In my own medical file, it would explain that seven hours after Esmé’s birth I discharged myself against medical advice so that I could be with my baby. My file would note that the very day my daughter was born, I was back on my feet in the NICU, trying to absorb the sight of my daughter, limp and unmoving, hooked up to some kind of pod out of a science fiction story.

After a week of tests and procedures and trying to coax her to eat — all recorded for medical posterity — and admiring her dark almond-shaped eyes and the deep wise soul I found there, Esmé was discharged and allowed to go home. Not in her medical file? The hope I felt that from here, things could only get better.

Feeding Esmé at home was daunting. Offering her a bottle, she'd drink laboriously, sputtering and coughing, her body growing hot and sweaty. Almost immediately afterward, vomit would spill out of her little mouth and nose in unimaginable quantities as she frantically moved, trying to clear her airway. Her tiny fragile body did not grow or get stronger. Her head lagged, her arms lay limply. She made only the tiniest squeaking cry.

While I waited in that room, I was certain my daughter had died. In a way, I suppose, I was right. She had.

And then there was the purring. Esmé sounded as if she was perpetually breathing underwater — because, we know now, she was. Her lungs were slowly, slowly filling up with the inhaled milk. Now, despite being followed by a pediatrician often more than once a week and, later, a gastroenterologist, the fact that Esmé was slowly drowning — as I lovingly fed her — was missed.

Over and over again, we missed it.

That is, until the day that Esmé became sick enough — vomiting and shaking almost constantly — that I brought her, with the help of my sister, to the local emergency room. By the time we walked in the door, Esmé was in respiratory distress, her body limp and blue-tinged in my arms.

Later, Esmé's oxygen blood levels began to drop suddenly, and we were removed from the room, sent down the hall to wait while her heart stopped beating and her lungs stopped breathing in and out. While I waited in that room, I was certain my daughter had died. In a way, I suppose, I was right. She had. But she came back to us, after her tiny heart was coaxed to start again by doctors pushing hard against her chest, her breathing managed by the hand of a respiratory therapist.

It made me aware of the tether that ties her to me from my heart to hers. It made me understand that this tether stretches from where I am sitting now to where she plays a few feet away. It also stretches down the hall from the waiting room in the ER. And also? It stretches somewhere beyond.

From that moment on, nothing was ever the same.

Esmé’s medical file would tell us that her lungs had filled with milk slowly over her short three months of life and it caused aspiration pneumonia, a pneumonia caused by inhaling oral or gastric contents. Left untreated, the pneumonia worsened and began to shut her body down. In the weeks following her cardiac arrest Esmé battled for her life in all the quiet ways surrounding extreme sickness: intubated, unmoving, unknown. Then, slowly, slowly, Esmé resumed breathing on her own. Eventually doctors performed surgery to help protect her lungs from reflux and they also placed an abdominal feeding tube into her body, which, five years later, still supplies all of Esmé’s calories.

There is more to this story, however, than the medical explanation. The story is that my daughter lived. And in the years since, she’s thrived in her own way. She has a life filled with beauty and meaning and unbelievable challenges. And love. So much love.

What happened the day her heart stopped changed us — both of us. It made me aware of the tether that ties her to me from my heart to hers. It made me understand that this tether stretches from where I am sitting now to where she plays a few feet away. It also stretches down the hall from the waiting room in the ER. And also? It stretches somewhere beyond. Somewhere I can't see or touch or taste or smell or feel. But this connection from me to her, it strengthens as it stretches. When she went beyond, I felt the tearing in my chest, strong enough to make my own heart want to stop pumping. But still, it stretched.

The day Esmé’s heart stopped was her trauma — absolutely, undeniably hers. It happened in and to her body. It was also, in a different way, my own.

But here's the thing: Some of what Esmé's cardiac arrest changed for me is frightening and difficult to live with. I worry it will happen again. I live with the constant knowledge that it is possible I could outlive my child. I also live with a lot of goodness and gratitude and happiness and love. And these are the things I want to explain to my friend across the table, the things I want to explain to other mothers, the things that get caught up in my throat when I try to say the words, “When she was 3 months old…”

Most of all, however, I want other mothers to be able to know and understand a few things without having to go through that fire, because, thankfully, most people will never have to travel through this kind of fire with their child. I want these other mothers to think about the kindness of perspective, of their child's heart beating freely, safely as they hold them in their arms, of the fact that even though the things I have seen — the things Esmé has lived — are things unlikely to ever happen to them, they have happened to someone.

Honestly, as I looked across the table at my friend, I thought about how tough it is to be my friend. I know this. I say awkward things about cardiac arrest and disappear into the past. I struggled to be around my friends' children — to hold them, see them, speak to them. And I’ve walked away from a friend or two when they've worried incessantly that her strong, growing toddler is going to starve. I used to try to hide these things about myself, but I don’t anymore.

The day Esmé’s heart stopped was her trauma — absolutely, undeniably hers. It happened in and to her body. It was also, in a different way, my own trauma. It broke my heart. My daughter’s cardiac arrest broke my heart… and it continues to break my heart.

But in the same ways it broke me, it also remade me broken and beautiful and strong.